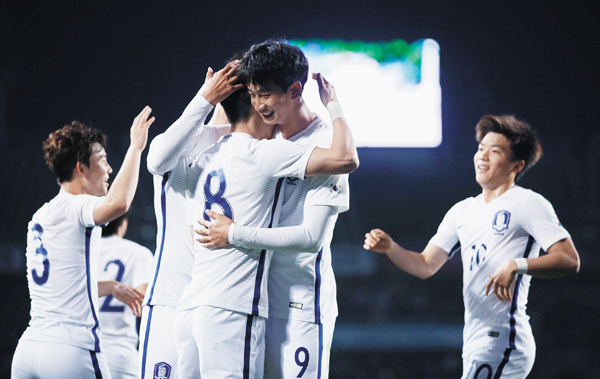 South Korean U-23 national football team manager Shin Tae-yong wasn’t totally pleased with the performance of some of his players on Monday against Algeria. But the 3-0 victory will suffice.

“Everything looked good but it was somewhat disappointing to see our fullbacks Sim Sang-min and Lee Seul-chan not playing up to their potential,” said Shin. “But overall, the game was satisfactory and I appreciate the players’ effort to put some variety into their plays.”

Monday’s game at Goyang Stadium was the second of two international friendly games against the African team. On Friday, South Korea beat them 2-0.

The key strategies that helped the national youth team to claim two clean sheet wins included diversified patterns of attack and putting pressure on the ball.

With the Summer Olympics in Rio on the horizon, the Algerian friendlies offered Shin a chance to test the capabilities and tactics of his squad. After winning the first friendly match on Friday in Icheon, the team travelled to Goyang in Gyeonggi province to meet its contenders once more on Monday in front of over 14,000 spectators.

The team started the match with a 3-4-3 formation, which was in stark contrast to the previous game on Friday when the South Korean placed four defenders in the back instead of three.

The opening goal for the Taeguk Warriors came in the 22nd minute of the match. Kim Hyun flicked a long throw by fullback Sim with the back of his head and laid the ball in front of midfielder Lee Chang-min at the far side of the penalty box. Algerian defenders failed to contain Lee who was left alone to calmly drill a perfect shot past the Algerian goalie with his right foot.

Midfielder Moon Chang-jin added the second goal in the 59th minute. Defender Song Ju-hun lobbed a pass from the back which went over the Algerian defenders to find midfielder Ryu Seung-woo. Ryu linked the ball with a single touch to Kim, who in turn dished out the ball with a one touch pass to Moon just outside the box. Moon showed brilliance controlling the ball as he faked Algerian defenders with a turn to find the back of the net off his left foot.

Finally, Moon tripled the lead 15 minutes after his first goal of the match when South Korea won a penalty kick. The penalty kick was awarded after South Korean forward Park In-hyeok dashed into the penalty box when defender Park Dong-jin chipped the ball in from the right flank. Park In-hyeok was nudged by Algeria’s Raouf Benguit within the box. Although the Algerian goalkeeper predicted the path of Moon’s kick, he was defenseless against Moon’s powerful shot. Moon has tallied seven goals so far this year for the team; four in the Asian Football Confederation (AFC) U-23 Championship in Qatar and three in two matches against Algeria, one last Friday and two on Monday.

What’s noticeable about the three goals is that they came from various patterns of play. The first goal was initiated by a long throw-in. The second goal came from the combined effort of four players who connected the ball with one-touch passes. The penalty that made the third goal possible was created from a long pass from the side of the pitch.

At the heart of the night’s offensive strategy was one-touch passing. Other goal-scoring opportunities utilized the one-touch passing tactic, including the first chance that came in the 12th minute on a set play attempt. Lee pushed the ball to Ryu after a corner kick and Ryu connected a one-touch pass to midfielder Kwon Chang-hoon who was rushing in from the parameter for a shot. Kwon’s shot went straight to Kim, who deflected the ball with his heel, only to have it blocked by the Algerian goalie.

Another style of play in both games involved constant pressure on the ball by both defenders and strikers. Whenever South Koreans lost possession in the Algerian side of the field, strikers and offensive midfielders challenged the Algerians. While the offense slowed down the Algerian attack, the South Korean defenders were able to reshuffle their formation to prepare for an attack.

For the South Korean youth team, defensive tactics were initiated from the upfield, and fans were able to see a glimpse of “Total Football,” a nomenclature in the sport in which players’ adaptability allow them to assume any role in the pitch, defensive as well as offensive.

The squad in 2012 Summer Olympics in London, which included current national ace midfielder Ki Sung-yueng and FC Seoul star striker Park Chu-young, captured bronze in the tournament. In the approaching Rio Games, Tottenham Hotspur’s Son Heung-min is likely to join the squad as a wildcard.