The miracle at Palais de Chaillot

The miracle at Palais de Chaillot 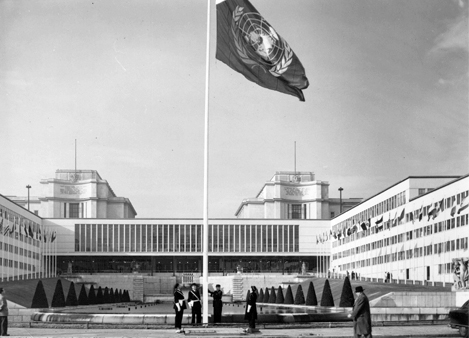 To Koreans, the Palais de Chaillot has more significance than a perfect photo zone. This is where the third United Nations General Assembly took place, and the Republic of Korea was recognized as the only legitimate government of the Korean Peninsula. While so many Korean tourists visit here to take a photo of the Eiffel Tower, not many know about the history, as there is no sign or plaque.
Until the United Nations headquarters was constructed in Manhattan in 1952, the UN Assembly met in different places. In 1948, the third general assembly was held at the temporarily converted Theatre National de Chaillot.

The United Nations General Assembly Resolution 195 on Dec. 12 approved the newly independent Republic of Korea as the lawful government of the Korean Peninsula. Forty-three years later in 1991, the joint entry into the United Nations of South and North Korea was passed unanimously, but it is meaningful that the UN recognized the Republic of Korea, not North Korea, as the lawful government. It was the day when the legitimacy and lawfulness of the South Korean government was officially recognized by the international community.
For the Republic of Korea, established on Aug. 15, 1948, through an election in South Korea on May 10, the recognition of the international community was a desperate task. The UN plan to form a single government through an election in both South and North Korea failed as the Soviet Union had ordered North Korea not to follow. The Syngman Rhee administration was launched through a half-election and sought ways to get recognition by the United Nations. Chang Myon and Chang Ki-young were the head and deputy head of the eight-member delegation, respectively, with Chough Pyung-ok, Chung Il-hyoung, Kim Hwal-ran and Mo Yun-suk as advisers. The delegation was sent to Paris for a diplomatic battle.

The United Nations was not favorable toward the newly established country. The Soviet Union and other countries of the Communist bloc openly and stubbornly interfered. Soviet Foreign Minister Andrei Vyshinsky used all connections and strategies to prevent the resolution from being presented. The delegation appealed for support for three months. The resolution was presented on the last day and was passed with 47 votes, with six voting against it and one abstaining. It was the miracle of Palais de Chaillot and the first diplomatic triumph of the Republic of Korea.

UN General Assembly Resolution 195 “declares that there has been established a lawful government [the Government of the Republic of Korea] having effective control and jurisdiction over that part of Korea where the Temporary Commission was able to observe and consult and in which the great majority of the people of all Korea reside.” Scholars have different interpretations whether it refers to the only lawful government in the Korean Peninsula or below the 38th parallel.

In any case, it does not change the fact that the United Nations, established at the end of World War II, officially recognized the Republic of Korea as a lawful government. Former Prime Minister Lee Hong-koo said, “It has universal value that suits the founding missions of the United Nations that the UN led the establishment of a nation on the Korean Peninsula victimized by imperialist aggression and forced to be divided by the powers.” The United Nations could send UN forces to fight against North Korea’s invasion.

France has a long connection to the founding of Korea. In April 1919, the Provisional Government of Korea was formed in the Shanghai French Concession. As World War I ended, Kim Kyu-sik lobbied for independence in Paris on behalf of the Provisional Government of the Republic of Korea. A plaque commemorating their activities was put up on 38 Rue de Châteaudun in 2006 at the request of the Korean government.

A marble sign commemorating the Universal Declaration of Human Rights and the Convention on the Prevention and Punishment of the Crime of Genocide at the third General Assembly is in the lobby of the Theatre National de Chaillot. But there is no sign on the recognition of the Republic of Korea. The spokesperson of the National Theater said that she was not aware of it, and it would be a good idea to prepare a sign through consultation with the foreign and cultural ministries of France. Yonsei University Prof. Kim Myong-sob and former head of the Korean Cultural Center in France, Sohn Woo-hyun, also proposed the same idea at the Korea-France Leaders Forum in celebration of the 130th anniversary of diplomatic ties last week.

According to French Foreign Minister Jean-Marc Ayrault, who gave the keynote speech at the Korea-France Leaders Forum, President Park Geun-hye is scheduled to make a state visit to France in early June. Hopefully, she will be able to attend the unveiling ceremony of the plaque commemorating the recognition of the Republic of Korea by the third United Nations General Assembly.