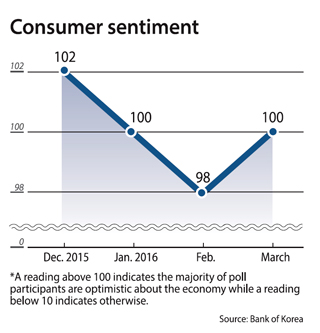 Consumer sentiment in Korea, which has been falling since the beginning of the year, has stabilized for the first time in four months.

Much of the improved sentiment is believed to have been caused by the stabilizing global market, which was affected by the increase in crude prices and jitters in the Chinese market at the beginning of the year. As well, the cooling of geopolitical tensions with North Korea, reflected in rising stock purchases by foreign investors, is also believed to have been a key contributor.

According to the Bank of Korea on Tuesday, the composite consumer sentiment index (CCSI) for this month rose two points from the previous month to reach 100; indicating that only half of the consumers are pessimistic. A reading of less than 100 means the majority of the poll have less confidence on the economy and a reading above indicates otherwise.

In February, the sentiment fell to the lowest level in eight months at 98, which was the same confidences level in June last year when the outbreak of the Middle East Respiratory Syndrome (MERS) dampened the mood and sharply curbed an economic recovery.

Consumer confidence has been falling since December which registered the slowest pace in 25 years. Global uncertainties, including the sharp deceleration of the Chinese economy and low crude prices continued.

“Although the market hasn’t fully recovered, uncertainties including the geopolitical tension with North Korea have eased,” said a BOK official.

Tensions with North Korea have been rising since the beginning of the year when Pyongyang tested its nuclear bomb in January. The test resulted in Seoul shutting down the Kaesong Industrial Complex last month, which was the only economic cooperation between the two Koreas.