Koreans, particularly those in their 20s, want the government to spend more money on creating new jobs, according to a survey conducted by Gallup Korea.

Some 27 percent of respondents said improving the labor market in general should be the government’s priority when it comes to budget planning, while another 25 percent identified social welfare.

About 36 percent of those in their 20s said it was most important that the government spend money on the labor market, according to the survey released Tuesday.

“Small and midsize companies have a relatively less attractive welfare system compared to larger ones, and the government should consider giving more government-level incentives so that many job seekers can willingly apply to them,” said one respondent in their 20s.

Koreans also said the job market is the most important factor when it comes to social welfare. Some 29 percent pointed to the labor market, while another 18 percent said the low-income group needs most help.

“The paradigm for social welfare is shifting from traditional welfare to improving the work environment,” Gallup said in a report.

Twenty-four percent of respondents believed that the budget for culture and sports needs to be reconsidered, while 13 percent said the budget for defense and foreign affairs needs restructuring.

Gallup also asked them why they thought Korea’s birthrate was so low.

Many said child care costs and private education expenses are holding them back from having more babies. They also argued that there is lack of high-quality child care facilities, making it hard to both work and care for a child at the same time. 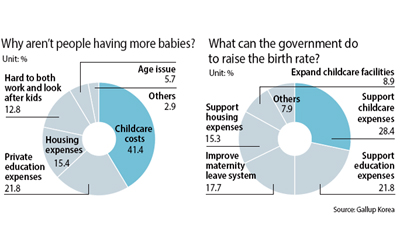 Additionally, some respondents said the government needs to improve maternity system in general.

“Men can’t dare say they want to take paternity leave, and female workers are left with no option but to quit their jobs when they give birth,” said a female respondent in her 30s.

A total of 40.8 percent said cost was the main reason why more Koreans weren’t getting married.

One out of five people said the government needs to support their child care and education expenses in order to raise the birthrate.

Many wanted the government to spend more to improve the country’s social welfare. However, some 70 percent said they would not be willing to spend more in taxes in order to do so.

On the other hand, 30.7 percent said they are willing to pay more taxes so that the government can spend more money on welfare.

Eighty percent of respondents said the government can increase the budget for social welfare by slashing other budgets. Only 9.5 percent said tax increases were the way to go.

The Ministry of Strategy and Finance and the Korea Institute of Public Finance requested the survey, and Gallup asked a total of 1,000 people between the ages of 19 and 70 via mail.

The pollster then followed up with group interviews.