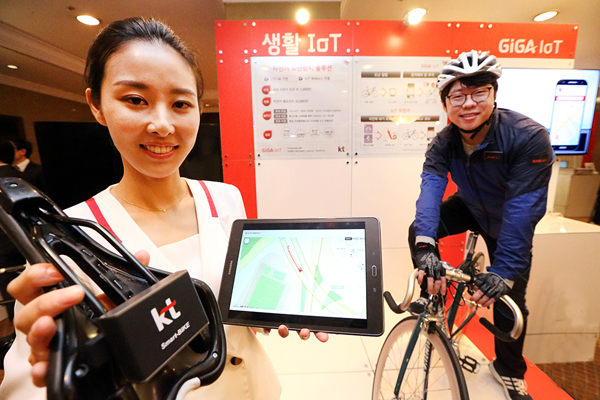 A model shows an IoT device on Tuesday that enables users to track the location of bicycles in real time. [KT]

Telecommunications provider KT has finished establishing a nationwide network to transmit data among smaller Internet of Things (IoT) devices and for machine to machine connections, the company announced on Monday.

The LTE-M network, a narrowband version of LTE connection, is the first low-power, low bandwidth network to be deployed nationwide to primarily serve IoT devices and services.

Along with the build-up of the network, KT also decided to invest 150 billion won ($128.8 million) on the Narrowband IoT technology that could promote various applications on the low-power network.

The introduction of the network could give KT an upper hand over other telecom players in the race into the IoT market.

LTE-M is a type of Low-Power Wide-Area Network (LPWAN) that operates at a lower cost, and with greater power efficiency. The low power network is designed to support deployments of IoT devices.

Although KT completed the development of the network, the service and monthly plan based on the new
coverage will come out in the second quarter.

The company demonstrated a range of services that could run on the network. Among them was a bicycle-tracking service equipped with a GPS system to show the locations of bicycles in real time.

To increase the market size, KT will offer the IoT coverage for free by the end of this year. The carrier will also distribute 100,000 modules carrying the LTE-M network for free to create an ecosystem for the IoT industry.

The cellular operator said it would not be difficult to build the low-power LTE because it only requires a software update in the network, not a network overlay.

The telecom company said that LTE-M has superior coverage and safety compared to other low-power networks offered by LoRa Alliance and Sigfox.

KT is not alone in jumping into the IoT-friendly network business.

SK Telecom, the top wireless carrier, announced earlier this month that it will spend 100 billion won to establish a network system dedicated to Internet of Things (IoT) devices within this year.