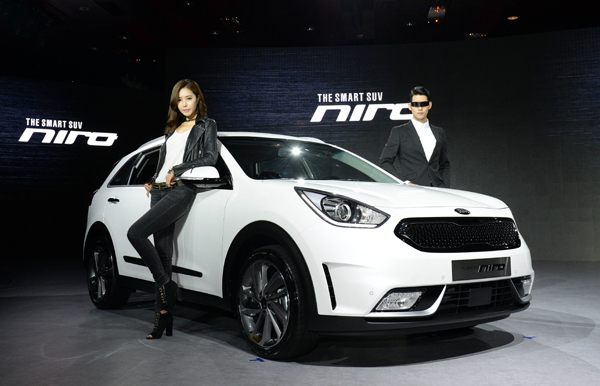 Kia Motors’ Niro, Korea’s first compact SUV that has been developed into a hybrid car, was officially launched on Tuesday.

Boasting a fuel efficiency of 19.5 kilometers per liter (45.9 miles per gallon), better than existing models of the same type, Kia has set a domestic sales target of 18,000 units by the end of this year.

The car comes in three trims, with a sticker price that ranges from 23.27 million won ($19,900) to 27.21 million won. But the company said consumers can purchase the Niro at between 22.35 million won and 26.55 million won, a maximum 1.9 million won cheaper than the Tivoli diesel LX model, as hybrid cars get tax reductions and 1 million won in government subsidies.

The fuel efficiency of the car tops all its rivals in the category, including Renault Samsung Motors’ QM3, Ssangyong Motor’s Tivoli and GM Korea’s Trax, the company said at a launch ceremony held at the W Seoul Walkerhill in Gwangjin District, northeastern Seoul, on Tuesday.

The secret to the Niro’s improved efficiency lies in the new engine and transmission, which was developed solely for the hybrid car: the Kappa 1.6 GDI engine and six-speed dual clutch transmission, Kia said.

Other contributors to the enhanced fuel efficiency include the lighter weight of the vehicle by using aluminum on the car’s tailgate, hood and front and back-wheel suspension parts.