‘Ars Nova’ series returns with ‘classics of the future’

‘Ars Nova’ series returns with ‘classics of the future’ 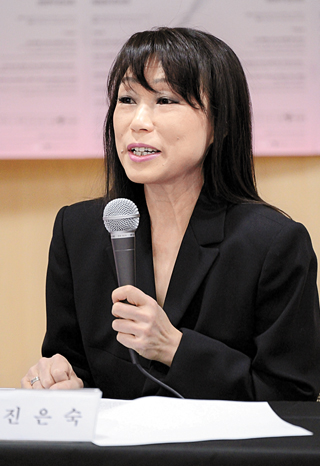 
The Seoul Philharmonic Orchestra is continuing its “Ars Nova” series this year, showcasing contemporary music, or as the orchestra calls it, the “classics of the future.”

The series began in 2006 under the direction of the orchestra’s composer-in-residence, Chin Un-suk. The spring concerts are being held today and April 5 at the LG Arts Center in Seoul.

She is a celebrated composer of contemporary music, winning the Grawemeyer Award for Music Composition in 2004 and the Prince Pierre Foundation Music Award in 2010.

Her recent work, “Le Silence des Sirenes,” which had its world premiere at the 2014 Lucerne Festival, will be performed at the finale of the Tongyeong International Music Festival on Sunday under the baton of Christoph Eschenbach.

“‘Ars Nova,’ which has 10 years of history, has premiered 170 important pieces of today’s contemporary music scene, including world premieres and Asian premieres,” Chin said in a press interview.

Also on the program is the Asian premiere of “Fluchtpunkte for 5 Instrumentalists” composed by York Holler, which is for percussion, brass and woodwind instruments and very experimental in style.

Also, “Mania for Solo Cello and Ensemble,” written by Esa-Pekka Salonen, will have its Korean premiere.

At “Ars Nova Series 2: Orchestral Concert” on April 5, “Lexikon II for Orchestra” will be performed, along with the Korean premiere of an interesting piece by Shostakovich, a suite from the opera “Lady Macbeth of Mzensk,” which exposed Soviet tyranny and thus angered the leader Joseph Stalin.

This spring’s series will be even more special as composer Chin will give a talk before each concert, which may help end the belief that contemporary music is abstruse and difficult to understand. For more information, visit www.seoulphil.or.kr.