TIMF kicks off with pioneering sounds

TIMF kicks off with pioneering sounds 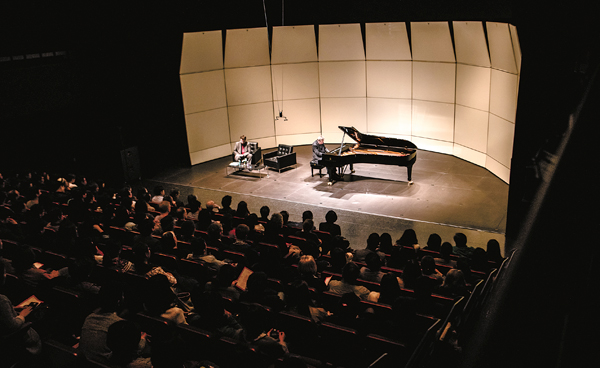 Philip Glass plays the piano during the concert “An Evening with Philip Glass” on Sunday. A composer of both classical music and film scores, his style is characterized as minimal music: The same phrases repeat with several variations. He visited Korea for the second time to stage his film opera, “La Belle et la Bete,” in Seoul and in Tongyeong.[TONGYEONG INTERNATIONAL MUSIC FESTIVAL]

TONGYEONG ­- This beautiful coastal city in South Gyeongsang is indeed full of artistic inspiration - the vibrant air coming from the glittering sea and the occasional short blasts of boat whistles. People become artists of any kind, as a way to express their fluttering minds.

The annual TIMF has a tradition of inviting the world’s most renowned musicians, but it does not only rely on their star power. It makes every concert novel with elaborately prepared repertoires under a common theme or slogan. This year, under the slogan of “Sounds of Tomorrow,” the music festival hopes to captivate the audience with music ranging from classics to jazz. 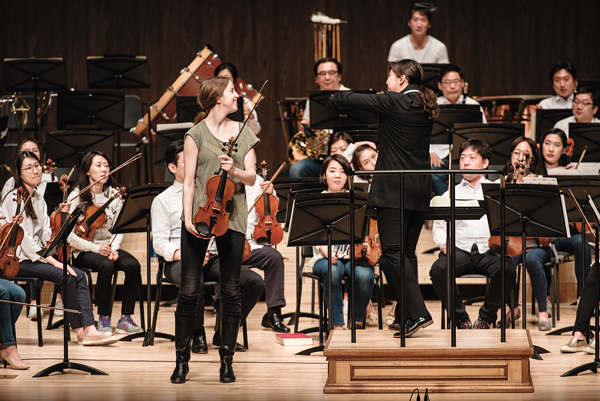 “The slogan, ‘Sounds of Tomorrow,’ represents the pioneering spirit,” said Florian Riem, the CEO of the Tongyeong International Music Foundation. He said that this year’s TIMF will introduce the audience to music that was considered rather revolutionary or underrated at the time it was made. He added and that the festival hopes to inspire future generations with the music.

In this sense, World Music Days, another music festival being held by the International Society for Contemporary Music, is being jointly held with the TIMF from March 28 to 31. During the period, 67 new compositions, selected from among 500 works from around the world, will be played during performances such as the “Asian Composers Showcase” and many more.

So far, the festival got underway with seven performances so far. First, the opening concert titled “Good Friday Spell” was performed by the Gyeonggi Philharmonic Orchestra under the baton of artistic director and chief conductor Sung Shi-yeon. The program included Wagner’s last opera “Karfreitagszauber,” or “Good Friday Spell,” Strauss’s “Ein Heldenleben,” or “A Hero’s Life,” as well as Mendelsshon’s Violin Concerto in E minor. Violinist Vilde Frang, winner of the 2012 Credit Suisse Young Artist Award, played with the orchestra.

The opening concert acted like a short summary of the festival ahead, as its repertoire consisted of pieces by Wagner and Strauss, both of whose works were not recognized during their lifetimes yet were uplifted by posterity. 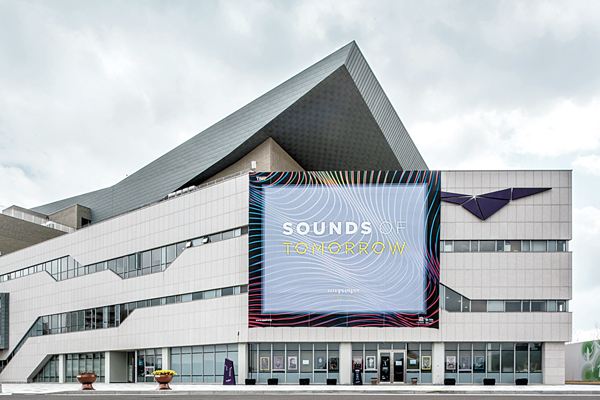 The festival is being held at Tongyeong International Music Hall, which is located in the seaside city in South Gyeongsang and opened in 2014.[TONGYEONG INTERNATIONAL MUSIC FESTIVAL]

Then, the opera “La Belle et la Bete” composed by Philip Glass was performed during the first two days of the festival. It is a film opera that combines Jean Cocteau’s 1946 movie of the same title with Glass’s opera. Live music by the Philip Glass Ensemble and opera singers are performed concurrently with the film.

Glass’s works are very experimental in style as he likes to combine his music with film, text, dance and more; this is actually how Glass is inspired and inspires others.

“Though I’ve never met Cocteau, he’s the biggest collaborator of mine,” Glass said during a press conference last week.

The composer appeared on stage again on Sunday to talk about his music and life as he approaches his 80th birthday next year. The talk concert, “An Evening with Philip Glass,” enabled the audience better understand Glass, with a talk prepared by Riem. Glass even played three piano pieces to demonstrate his minimal style, or a style that repeats same phrases with variations.

In addition, the concert of Mario Brunello and Orchestra Ensemble Kanazawa was worth noting. A cellist who won the 1986 International Tchaikovsky Competition as well as a conductor, Brunello played Schumann’s Cello Concerto, Op.129. While holding the cello, he conducted the orchestra using his body - with his breath, his right hand holding the bow and the movements of his head.

Stravinsky’s “Pulcinella Suite,” which is a representative example of neoclassicism, as well as Sollima’s “Violoncelles, Vibrez!,” were played at the March 27 show as well.

While the 10-day concert is halfway over, it has a lot more music to offer the audience. Artists such as Qarteto Casals, Ensemble 2e2m, soprano Marisol Montalvo, pianist Paik Kun-woo and jazz vocalist Stacey Kent are going to visit the small yet beautiful city of Tongyeong. And musical experiments such as the “Co-bra Project,” which combines Korean and Brazilian sounds, will take place at this year’s TIMF.

The finale Tongyeong Festival Orchestra concert on Sunday will be conducted by maestro Christoph Eschenbach.