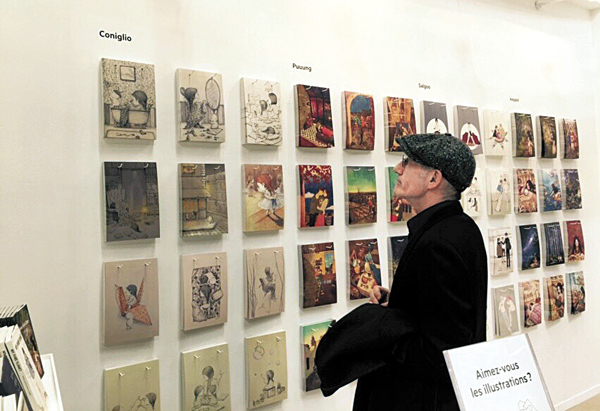 A visitor admires artwork on display at Naver’s Grafolio booth at the 2016 Paris Book Fair, which ran from March 17-20. [NAVER]

Last November, Naver Corporation CEO Kim Sang-hun and French Minister of Culture and Telecommunications Fleur Pellerin signed a memorandum of understanding to collaborate on cultural promotion and start-up development. The memorandum of understanding was signed as part of preparations for the “2015-2016 France-Korea Year,” celebrating 130 years of diplomatic relations between the two countries.

Under this agreement, Naver and the Embassy of France in Seoul will jointly launch an online video platform called “French Cast,” through which viewers can learn about French culture, history, art, education and tourism.

French Cast shows various programs from major French TV stations such as France 24 and TV5 Monde, along with exclusive content provided directly by artists and athletes. Its videos allow viewers to vicariously experience French culture in all of its forms.

There will be 10 new programs on French Cast every month, and the company plans to expand its content to other areas such as sports and science.

As part of the cultural exchange, “Grafolio,” Naver’s content creation portfolio service, will participate in the 2016 Paris Book Fair. A portmanteau of the words “grand” and “portfolio,” the service has been recognized as one of the book forms of the future along with webtoons and e-books.

Launched in 1981, the Paris Book Fair is an annual international event where professionals in the publishing industry gather from all over the world. From March 17 to March 20, Naver’s Grafolio ran its own booth at the fair, a first for an online illustration service.

The Grafolio booth displayed postcards and sample books featuring artwork from four of its major artists. It also allowed viewers to experience the portfolio service themselves using liquid-crystal displays and tablet PCs.

Having confirmed the global marketability of its webtoons through the 2013 Frankfurt Book Fair and the 2014 London Book Fair, Naver continues to push forward by securing local content creators and international publishing contracts. The corporation sees its participation in the 2016 Paris Book Fair as a sign that Grafolio will do well abroad. It believes that the service’s main content - illustrations and music - transcends barriers such as language and religion, allowing content creators to reach out to international audiences.

“From the very beginning, Naver has grown alongside creators of original online content,” says Noh Jang-su, manager of Grafolio. “We will use Grafolio to pave the way for domestic content creators to enter foreign markets.