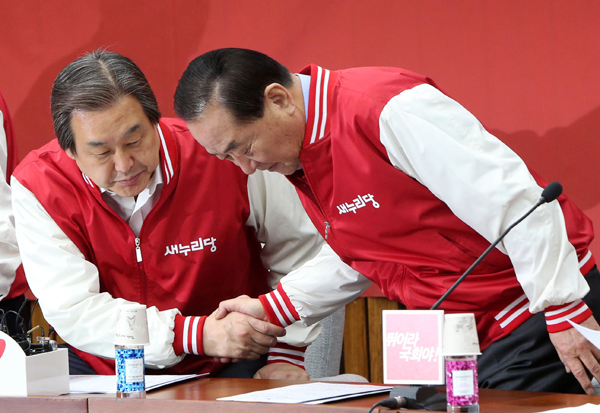 Kim Moo-sung, left, chairman of the ruling Saenuri Party, shakes hands with Suh Chung-won, right, a Supreme Council member and a leader of pro-Park faction, at a meeting where they will discuss on campaign strategy Tuesday in the National Assembly. They were in conflict over nominations.[NEWSIS]

The ruling party’s war against party defectors running as independents in next month’s general election showed no sign of abating Tuesday.

“We must be extremely careful not to make any comments or actions that can be particularly seen as factional conflicts, so as to avoid disappointing voters and ruining our campaign,” Chairman Kim Moo-sung of the Saenuri Party said Tuesday morning at the ruling party’s first campaign strategy meeting.

During the recent candidate selection process, Saenuri Party members perceived as insufficiently loyal to President Park Geun-hye were passed over for nominations and last week many subsequently decided to run as independents, promising to return to the party after their victories. Saenuri candidates are therefore facing not only liberal opponents but former colleagues as well.

“The leaders agreed that party members must not make unnecessarily provocative remarks,” Rep. Ahn Hyoung-hwan, spokesman of the Saenuri campaign committee, said after the campaign strategy meeting. “We agreed to move forward in the spirit of reconciliation with integrity and humility.”

“The more you attack them,” he warned, “the stronger they become.”

But for now, it remains to be seen whether these efforts will bear any fruit. Rep. Choi Kyung-hwan, for instance, Park’s former deputy prime minister and the head of Saenuri’s North Gyeongsang campaign, shows no signs of backing down.

“Voting for the independents is the same as voting for the opposition,” Choi said Tuesday at the North Gyeongsang campaign office’s launch.

But Saenuri has good reason to make peace, as the competition is strong. In North Gyeongsang, Rep. Kim Tae-hwan is running as an independent in Gumi B District. And in Daegu, four lawmakers - Reps. Yoo Seong-min, Joo Ho-young, Kwon Eun-hee and Yoo Sung-kull - are running independently.

“The president’s portraits, distributed to Saenuri lawmakers’ offices in June 2013, should be returned to the Daegu chapter office by [Tuesday],” the letter said. Reps. Yoo Seong-min, Yoo Sung-kull, Joo and Kwon received the letters.

“This is extremely petty,” said an aide to Joo. “Park loyalists are making an issue over the president’s portraits because they are losing.”

An associate of Rep. Yoo Seong-min told the JoongAng Ilbo on Monday the former floor leader has no intention of returning the president’s portrait since he has already declared that he will return to the party after winning the election.

Ahn said Tuesday the party leadership has agreed it is undesirable for this issue to be publicized any further.

“The party won’t raise this issue any more,” he said, adding that the party’s central leadership won’t take any relevant measures against the Daegu chapter either.

A key Park loyalist, Rep. Suh Chung-won, expressed his agreement with the decision, a source told the JoongAng Ilbo.

“Anyone who respects the president can hang her portrait,” he was quoted as saying during the campaign strategy meeting Tuesday. “Raising an issue about this will only fuel the conflict.”