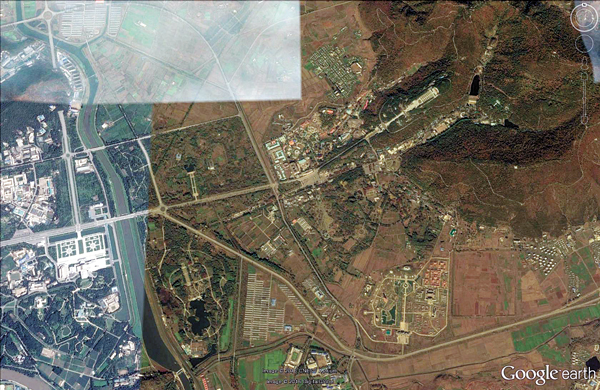 Ko Yong-hui, left, mother of North Korean leader Kim Jong-un, with Kim Jong-il, right, late leader and father of Kim Jong-un, pose for a picture. The photo, presumably taken between the 1980s and 1990s, was released in 2012 by Japanese media. [JOONGANG PHOTO]

The grave of Ko Yong-hui, mother of North Korean leader Kim Jong-un, lies eight kilometers (4.9 miles) northeast of the Arc of Triumph, in central Pyongyang, not far from the Revolutionary Martyr’s Cemetery, according to a South Korean government source says.

Ko was reportedly buried in a tomb near Mount Taesong, Pyongyang, but this is the first confirmation of the tomb’s exact location.

“Ko Yong-hui’s grave is separately located at the foot of Mount Taesong near the Revolutionary Martyrs’ Cemetery, which is similar to South Korea’s Seoul National Cemetery,” a senior government source told the JoongAng Ilbo on Monday. 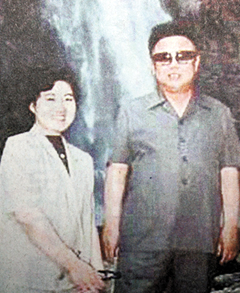 A satellite photo shows that the grave of Ko Yong-hui lies 4 kilometers (2.4 miles) from the Kumsusan Palace of the Sun in Pyongayng, at the foot of Mount Taesong near the Revolutionary Martyrs’ Cemetery. [GOOGLE EARTH]

“It seems the North idolizes Kim Jong-un’s mother,” the source said, adding that the Revolutionary Martyrs’ Cemetery is known among North Koreans as a sacred place, as it holds the graves of several hundred military commanders and soldiers who fought against Japanese rule.

Ko’s gravestone says she was born on June 26, 1952, and died on May 24, 2004, according to a source based in China who visited the site. The epitaph calls her “Mother of Great Songun Korea, Comrade Ko Yong-hui,” referring to the political term songun, the North’s military-first ideology.

Ko, born in Osaka, Japan, to parents of Korean descent, came to Pyongyang in 1961 or 1962 under the North’s repatriation program. She became a dancer for the Mansudae Art Troupe and allegedly met Kim Jong-il in 1972. Ko gave birth to her first son, Kim Jong-chul, the middle child of the late leader Kim. Ko and Kim had two more children, present leader Kim Jong-un and a daughter, Kim Yo-jong.

South Korea’s intelligence sources report that Ko died in Paris in 2004, after which the North transferred her body back to Pyongyang. Since her grave was formed in 2012, North Korean defectors have testified that the regime have forced its people to pay respect to her at the site of the tomb.

On key anniversaries, such as the birthday of Kim Jong-il, North Korean officials pay their respects at Ko’s grave after visiting Kumsusan Palace of the Sun, 4 kilometers away, where the bodies of the Kim Il-sung and Kim Jong-il are kept.