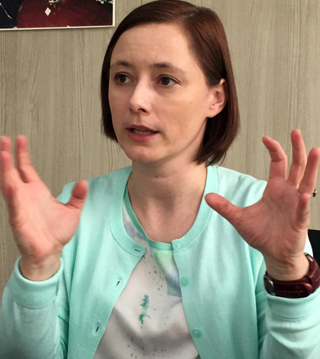 Joanna Hosaniak has fought for North Korean human rights for over a decade. The 42-year-old from Poland, currently deputy director general at Citizen’s Alliance for North Korean Human Rights (NKHR), was inspired by her country’s transition from socialism to democracy, which began in 1989 and was cemented with the 1990 election of President Lech Walesa.

Her interest in Korean culture grew while studying Korean literature at the University of Warsaw, and her compassion for North Koreans in particular began when she took work at the South Korean Embassy in 1999.

Her professional career as a North Korea human rights activist based in South Korea started in 2004 when she joined the NKHR, the world’s oldest nongovernment organization (NGO) devoted to North Korean human rights.

“Regardless of the political situation, we have to consistently care about North Korean human rights issues,” she said, presiding over a March 15 U.N. Human Rights Council that focused on the issue.

Marzuki Darusman, the U.N. Special Rapporteur on the Situation of Human Rights in North Korea, was also there.

In a recent interview with Hosaniak at the office of NKHR, she stressed the need to be prepared for any changes in the North’s regime and the importance of finding ways for the South Korean government to handle the North’s secret gulags, where approximately 100,000 prisoners are captive.

Hosaniak also underscored the need to hold accountable those responsible for human rights violations in North Korea, pointing out that in her own country, Poland, some of those responsible for the Holocaust, the genocide of Jews by Nazi Germany during World War II, went on to get decent jobs and enjoy happy lives.

Hosaniak received her doctorates from the Graduate School of International Studies at Sogang University last month. Her doctoral thesis examines the process by which personnel responsible for human rights abuses during World War II were punished after the collapse of the Eastern bloc, the collection of communist states in Central and Eastern Europe.

Asked if she has seen any changes with regard to North Korean human rights, she noted that the United Nation’s Commission of Inquiry on Human Rights in North Korea has aroused the interest of the international society, including young people, a hopeful sign that may prompt changes on the Korean Peninsula.