Moon is first local player to claim the MVP award

Moon is first local player to claim the MVP award 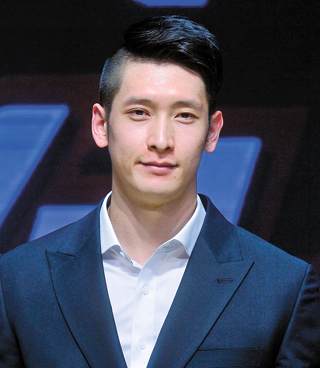 Moon claimed the regular season’s Most Valuable Player (MVP) award at the V-League award ceremony held on Tuesday. After graduating from Kyonggi University, the 1.98-meters (6 foot 6) outside hitter went on to play in the professional league in Turkey and finally returned home to Korea and joined the Skywalkers in 2010.

It is the first MVP award Moon has received in his career. He is also the first volleyball player in the men’s division to become the most popular player at the All-star game as well as the league MVP. Moon is especially popular among female fans for his good looks. However, he has demonstrated this season that he is more than his looks.

The Skywalkers, the regular season champions, dominated this season with 18 straight wins until Ansan OK Savings Bank Rush & Cash eventually edged the Skywalkers to grab the V-League championship title. The Skywalkers did not make it to the postseason last year and was are not considered contenders this year. However, as they trailed along, toppling the previous league winning spree record of 17 consecutive wins, the Skywalkers became the sensation in the Korean volleyball this year. At the center of the sensation was Moon.

Moon played in 36 games this season, or 133 sets, scoring 554 points while tallying 50 blocks and 39 services. Points aside, what measured heavily on Moon’s MVP award was his sacrificial style of play and the contribution he made to the team.

Before the season, other players found Moon difficult to approach. He is known for his stern facial expression and uncompromising attitude. However, as the captain for the Skywalkers, Moon felt the responsibility to change things around for the team. He began to smile more out in the court as well as during practices to ease the tension and help other players to gain positive energy.

In terms of the style of play, Moon has always been known for his spikes. However, he decided to take a step back to give his teammates opportunities to put points on the board. Moon cleaned things up on the court and players such as Oreol Camejo, who tallied 789 points, were able to stay active on the offensive side, focusing solely on putting up points.

Although the Skywalkers lacked any strategic element that made it stand out over other teams, it is Moon’s team attitude that can be credited as the source of power for the Skywalkers to place first in the regular season and put up a good fight against the defending champ Rush & Cash in the finals.

“The only reason I was honored with this award was because I was the team’s captain,” said Moon. “I would like to credit my coach Choi Tae-woong who made a favorable atmosphere for the players to enjoy the game rather than being burdened by pressure.”