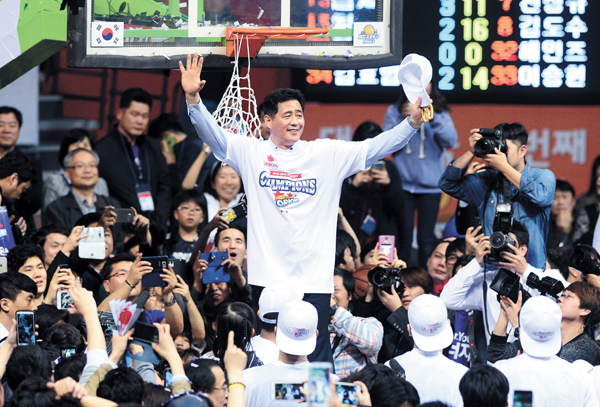 After 14 years, Goyang Orion Orions finally did it. The Orions grabbed its second Korean Basketball League (KBL) championship title in the history of the team on Tuesday after crushing Jeonju KCC Egis in the sixth game of the final series by 120-86.

Although Orions forward Lee Seung-hyun, who successfully contained Egis center Ha Seung-jin throughout the series, received the MVP award, other players, such as Joe Jackson and head coach Choo Il-seung, deserve the spotlight.

The final series was essentially a stage for Jackson to show off his game. In the six games against Egis, Jackson tallied 23 points, seven assists and 3.8 rebounds on average. In the final game, he grabbed a double-double, putting up 26 points and 10 assists alone to lift his team over regular season champions Egis.

“I felt good when I woke up in the morning,” said Jackson after the landmark win. “I contribute our team’s success to my teammates. Their focus on the game was what made it possible. The goal I set for myself before the season began was to win the championship title in Korea and I am happy to have achieved that.”

Jackson has received a lot of attention by fans throughout this season for his ball handling skill and dunks. Although he stands rather short at 1.80 meters (5 foot 9), he’s made a reputation as “King of the Dunk” among basketball fans. His “In Your Face” dunk over Changwon LG Sakers’ 2.06 meter center Kim Jong-kyu on November 21 is deemed one of the most outstanding highlights of the season.

Jackson also showed off his gravity-defying dunk in the final series when he slammed one over Egis’ forward Kim Tae-hong in the away game at Jeonju. His dunk was enough to silence Egis fans. “This is my first time living overseas,” Jackson said. “Initially, it was difficult for me to get a grip on the vibe here in Korea. The coach told me to focus on defense above anything else. I listened to him and eventually I was able to find my place in defense as well as offense.”

The Orions’ accomplishment can also be attributed to the leadership of head coach Choo who won his first KBL championship title in his 13-year career as a professional basketball coach.

Choo said that he was prepared to “cry his heart out” if the team won narrowly in a dramatic finish. But with a clear win of 30 points there was no doubt of the game’s conclusion.

Choo has had a rather bumpy, persistent career in basketball. His career as a player began in high school when he first joined the sport simply due to his height. He went on to play for Hongik University as a founding member of the team but never had much success in college. Afterwards, he joined KIA Enterprise, the predecessor of Ulsan Mobis Phoebus, ironically a team which Choo and the Orions defeated in the semi-finals this year.

He quit his professional career after three years and worked as a regular employee of KIA motors, only to take up a staff position a couple of years later for the Enterprise. His head coaching job did not begin until 1997 when he took over the post with the Korea Armed Forces Athletic Corps basketball team.

Since then, he has led the teams he oversaw to success consistently. Finally landing the head coaching job for the Orions in 2011, a team stuck at the bottom of the league for four years, he led them to the playoffs in only one year.

One of the remarkable elements of his leadership is the fact that Choo led the Orions this season without a so-called “big man” under the rim. However, he credits the absence of a big center to be one of the reasons behind his team’s success. “Without someone dominating by himself, our team had to work together. If one single player dictates the game, then it is impossible playing a team game. I wanted to play a game where all the players out in the court share responsibility,” said Choo.

“I’ve had good talents to work with,” said Choo. “My players played tremendously well and I am thankful for that. Now that we took the top, we will do our best to keep this position. What the Orions need now is dignity as champions and determination to protect the throne.”