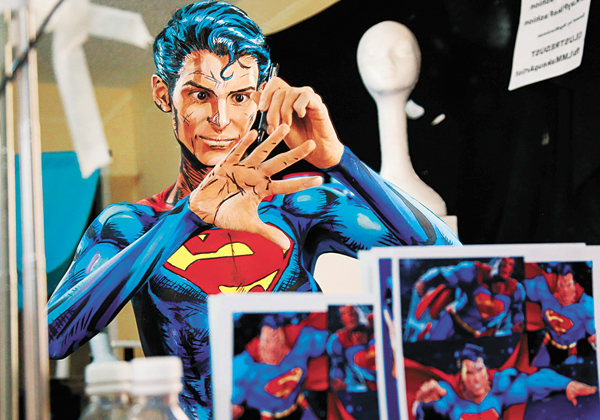 Kay Pike transforms herself using body paint and latex into Superman while live streaming at her home in Calgary, Alberta, on March 16. [AP/NEWSIS]

CALGARY, Alberta - Kay Pike stands in front of a giant mirror, dabs her brush into paint and touches it to her skin.

She’ll repeat the motion thousands of times over the next 12 hours as she transforms from a willowy blond artist to dark-haired Superman for viewers online. Twice a week, the 28-year-old turns her body into a different character for an Internet audience.

“We don’t talk about gender roles on my channel. In fact, when people say, ‘You should paint yourself as Superwoman,’ I’m like, ‘No. I want to paint myself as Superman,’” says Pike, who, when she’s done, looks like she could have been ripped from a comic book panel.

Pike is a fan of cosplay, in which participants wear costumes to represent a character from anime, comic books, cartoons, games or movies.

After sitting as a body paint model for a friend, Pike realized she could still dress up without having to make a costume. She posted a video of her first solo effort on Reddit and it caught the attention of Twitch.tv, a live-streaming company in San Francisco.

“One week later, I was live streaming body paint on Twitch.”

Pike started in December and already has 163,000 followers on Instagram.

She receives a little advertising money but relies more on donations from viewers and from Patreon.com, a crowdfunding site for artists. There is also cash from her fashion line, which she sells at comic conventions, as well as appearance fees.

“It’s like small income from a lot of different places that add up to a mortgage payment.”

Superman is a favorite of her husband, Moose, who narrates, reads posts from her followers and runs things behind the scenes.

In between singing along to pop music and answering questions from her followers, Pike gives step-by-step details on how she creates the character.

Pike refers to all her creations as her “little paint children.” She said it would be boring and lonely to do the painting without an audience.