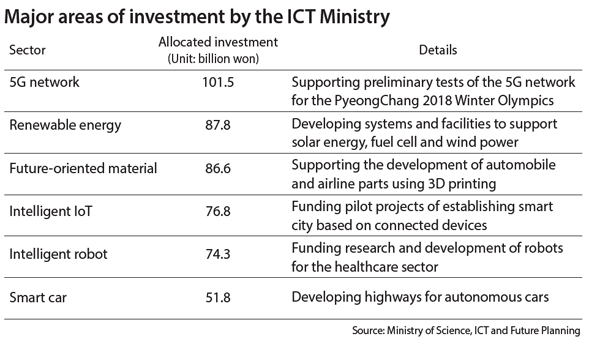 The Ministry of Science, ICT and Future Planning will shell out a combined 973.6 billion won ($850 million) this year to fund the research and development of emerging technologies including 5G networks, autonomous cars and robots.

The ICT Ministry finalized the spending plan on Wednesday during a council meeting. The investment is part of the government’s initiative called the “Future Growth Engine Project” through which it has pledged to spend a total of 5.6 trillion won on promising tech sectors by 2020.

Under the plan, the largest portion of the investment, 101.5 billion won, will go toward facilitating the development of a next-generation 5G wireless network. The ministry set the goal of making Korea the first country to adopt commercial service of the 5G network in 2020.

But this year’s budget will be primarily spent on assisting trial runs of the new network ahead of the 2018 PyeongChang Winter Olympics, according to the ministry.

Another area of focus is autonomous vehicles, which pose infrastructure and legal challenges to government bodies. The ICT Ministry allocated 51.8 billion won to build facilities and highways that it can use to test the safety and feasibility of autonomous cars. It is also pushing revisions to laws as well as new legislation to facilitate the commercialization of the cars as soon as possible, in cooperation with the Ministry of Trade, Industry and Energy and the Ministry of Land, Infrastructure and Transport.

The renewable energy sector will receive the second-largest amount, 87.8 billion won, as the ministry seeks to build infrastructure to support sources like solar power, wind power and fuel cell energy.

Artificial intelligence and robotics have become a new focus in the wake of the historic Go match between Google DeepMind’s computer algorithm and Korean world champion Lee Se-dol. With 74.3 billion won allocated, the ministry has set its sights on robots that can be used in health care and security. The budget will also be used to secure source technology to make robots for the manufacturing and welfare sectors.

The future-oriented materials segment will receive 86.6 billion won to strengthen industrial uses of 3-D printing in making parts for automobiles and aircraft.

Authorities also vowed to further the country’s status in its historically strong fields like semiconductors. Some 73.8 billion won has been reserved to fund research and development of next-generation chips.

The plan comes as the Chinese government has been making aggressive moves to maintain a leading position in the semiconductor industry.

In its five-year economic plan, the Chinese government announced it would increase its spending on research and development of semiconductors to 2.5 percent of its gross domestic product between 2016 and 2020.