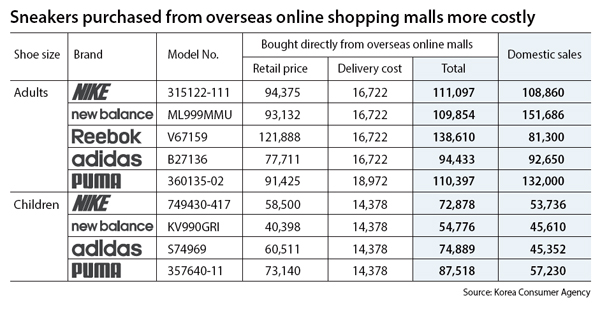 Mr. Kim, a 40-year-old employee at a game company, has been an avid user of overseas online shopping malls since making his first purchase two years ago. He often tells close friends about the advantages of buying everything from e-cigarettes to Nike shoes and golf drivers from abroad.

“There are so many choices that you wouldn’t find at discount stores here, and they are still offered at bargain prices,” Kim said.

In recent years, many Korean consumers have been shopping more on overseas online malls, causing alarm among Korean retailers that has led to major campaigns like the so-called Korean Black Friday.

But the experiences of shoppers like Mr. Kim notwithstanding, the Korea Consumer Agency released a report Wednesday showing that some products are still more expensive from overseas online malls compared to local retailers, and that complaints about service have doubled in the last year.

According to the agency, the same popular sneakers by brands like Nike and Reebok sold at Korean retailers were often cheaper than from overseas online shopping malls by as much as 70 percent.

The situation for children’s shoes wasn’t much different.

According to the study of nine different shoes - five for adults and four for children - only two were cheaper online from overseas than in Korea.

In most cases, the retail prices of popular brands were slightly lower on overseas online shopping malls, but those quickly swelled when delivery costs were included.

In the case of Nike’s Air Force 1 07 Low, the retail price on overseas online shopping malls when converted to won was 94,375 won ($82), which is 15 percent cheaper than the 108,860 won price tag here in Korea. But when the 16,722 won delivery costs are included, the same Nikes cost an additional 21 percent when bought from overseas. 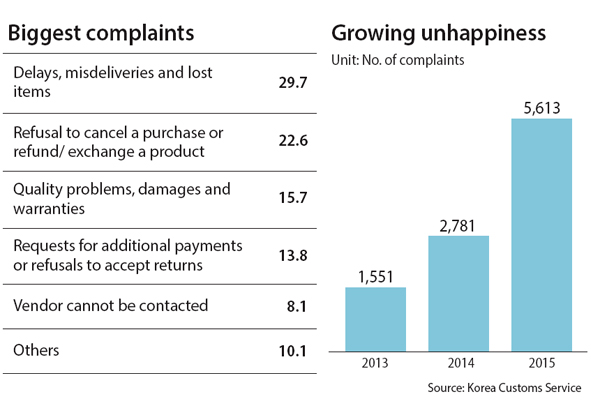 Reebok’s Furylite was 70 percent more expensive from online shopping malls than from retailers in Korea.

Price wasn’t the only problem with the overseas online malls that the consumer agency found during its study. The biggest issue was delivery time, which was oftentimes twice that of local online shopping malls.

“We advise consumers to be careful when purchasing popular brand sneakers from overseas online shopping malls, as the price of the same product could be different according to the size and color, and there are also frequent price changes.

Also beware of additional charges that can be incurred when trying to return or exchange goods.”

In fact, the Korea Customs Service on Wednesday said complaints made about direct purchases made on overseas online shopping malls has doubled last year, from 2,781 to 5,613.

But even these cases are unlikely to deter consumers from buying online.

“Shopping overseas is still most convenient and best for items that are rare here, like the Crocs golf shoes that I bought for 30,000 won,” Kim said.