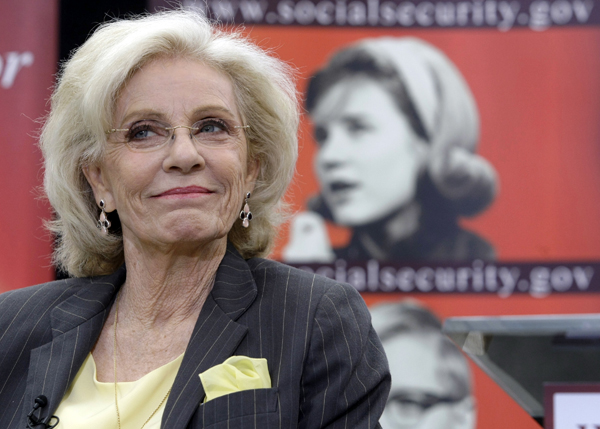 In this March 23, 2010, file photo, Academy and Emmy award-winning actress Patty Duke appears during a news conference at the Paley Center for Media in Beverly Hills, California. Duke, who won an Oscar as a child at the start of an acting career that continued through her adulthood, died Tuesday, of sepsis from a ruptured intestine. She was 69. [AP/NEWSIS]

NEW YORK - Patty Duke, who as a teen won an Oscar for playing Helen Keller in “The Miracle Worker,” then maintained a long career while battling personal demons, has died at the age of 69.

The actress died early Tuesday morning of sepsis from a ruptured intestine, according to her agent, Mitchell Stubbs. She died in Coeur D’Alene, Idaho, where she had lived for the past quarter-century, according to Teri Weigel, the publicist for her son, actor Sean Astin.

Duke astonished audiences as the young deaf-and-blind Keller first on Broadway, then in the acclaimed 1962 film version, appearing in both alongside Anne Bancroft as Helen’s teacher, Annie Sullivan (who won an Oscar of her own).

Then in 1963, Duke burst on the TV scene starring in her own sitcom, “The Patty Duke Show,” which aired for three seasons. She played dual roles as identical cousins Cathy, “who’s lived most everywhere - from Zanzibar to Barclay Square” while (according to the theme song) “Patty’s only seen the sights a girl can see from Brooklyn Heights. What a crazy pair!”

In 2015, she would play twin roles again: as a pair of grandmas on an episode of “Liv and Maddie,” a series on the Disney Channel.

“We’re so grateful to her for living a life that generates that amount of compassion and feeling in others,” Astin told The Associated Press in reflecting on the outpouring of sentiment from fans at the news of her death.

But throughout her life, she was “a warrior,” he said. “You watch this 4-foot-10, tiny imp of a lady who’s more powerful than the greatest military leaders in history.”

Born Anna Marie Duke in the New York borough of Queens on Dec. 14, 1946, she had a difficult childhood with abusive parents. By 8 years old she was largely under the control of husband-and-wife talent managers who kept her busy on soap operas and advertising displays.

In the meantime, they supplied her with alcohol and prescription drugs, which accentuated the effects of her undiagnosed bipolar disorder.

In her 1988 memoir, “Call Me Anna,” Duke wrote of her condition and the diagnosis she had gotten only six years earlier, and of the subsequent treatment that helped stabilize her life. The book became a 1990 TV film in which she starred, and she became an activist for mental health causes, helping to de-stigmatize bipolar disorder.

With the end of “The Patty Duke Show” in 1966, which left her stereotyped as not one, but two squeaky-clean teenagers, Duke attempted to leap into the nitty-grittiness of adulthood in the 1967 melodrama “Valley of the Dolls,” in which she played a showbiz hopeful who falls prey to drug addiction, a broken marriage and shattered dreams.

The film, based on the best-selling Jacqueline Susann pulp novel, was critically slammed but a commercial sensation.

During her career she would win three Emmy Awards, for the TV film “My Sweet Charlie,” the miniseries “Captains and the Kings” and the 1979 TV remake of “The Miracle Worker,” in which Duke played Annie Sullivan with “Little House on the Prairie” actress Melissa Gilbert as Keller.

“I know she’s in a better place. I will miss her every day but I will find comfort in the words of Helen Keller: ‘The best and most beautiful things in the world cannot be seen or even touched - they must be felt with the heart,”’ Gilbert wrote in tribute.

In the 1980s, she starred in a trio of short-lived sitcoms: “It Takes Two,” “Karen’s Song” and “Hail to the Chief,” cast as the first female president of the United States.

“Her career ebbed and flowed,” said Sean Astin, her son with her third husband, actor John Astin, “and sometimes she was stressed about it and sometimes she was at peace with it. And then she’d get to do something that she could sink her teeth into, that reminded her of what she was capable of.”

In addition to her acting career, Duke served as the president of the Screen Actors Guild from 1985 to 1988.

She starred in several stage productions, including a return to Broadway in 2002 to play Aunt Eller in a revival of the musical “Oklahoma!”

By then, she already had spent a dozen years living in Idaho with her fourth husband, Michael Pearce (who survives her), seeking refuge from the clutter, noise and turmoil of big cities, and from the tumultuous life she had weathered in the past.

In describing the role of Aunt Eller, and perhaps herself, to The Associated Press, she said, “This is a woman who has had strife in life, made her peace with some of it and has come to the point of acceptance. Not giving up.”