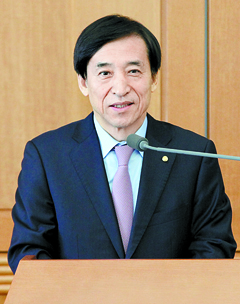 Although Bank of Korea Gov. Lee Ju-yeol is skeptical over the country’s economic growth for this year, he has put his foot down on market speculation that a rate cut is imminent.

“There have been relentless demands that a more aggressive policy should be implemented in revitalizing the economy as the low growth, low inflation situation continues,” said Lee on Wednesday, as he celebrated his second anniversary as the nation’s head on monetary policy.

“There have been numerous arguments that the central bank should take a more bold position in expanding the monetary policy, especially since many of the central banks in the advanced economies have further expanded their quantitative easing or have even adopted a negative interest rate.

“[But] as I have mentioned during the press briefing held after the monetary policy meeting earlier this month, there haven’t been changes to my stance.”

“There’s a limit in escaping low growth and low inflation simply with monetary or fiscal policy,” Lee said. “There needs to be continuous efforts on structural reforms and securing competitiveness.”

Lee also said Korea’s economy might not reach the 3 percent target that was revised in January from the previous 3.2 percent.

“There’s a possibility that the economy could fall short of the 3 percent growth we’ve projected at the beginning of the year,” Lee said. “We expect growth in the first quarter to be weaker than we have expected earlier as export continues to struggle and domestic economy decelerating.”

The governor said during his two years as the head of the central bank there have been a series of challenges, including expanding external uncertainties, the Sewol tragedy and, most recently, the outbreak of the Middle East respiratory syndrome.

“Faced with such challenges we have made so much effort and tried to minimize the margin of error on our growth outlook with tremendous difficulty,” said Lee. “But this is not a problem that is exclusive to us as it is a common issue among central banks around the world.

“There is a limit to raising the predictability of the policies and managing the market’s expectation consistently.”