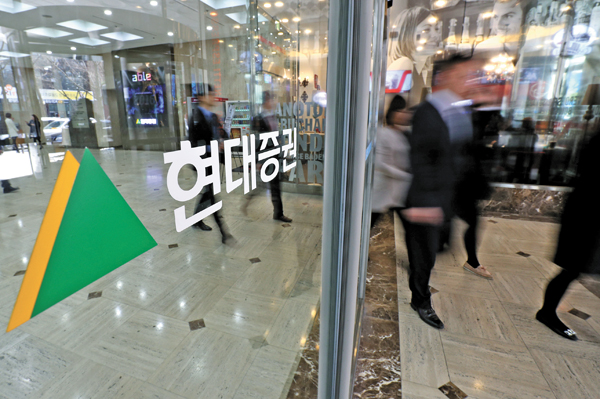 Employees pass through the main entrance of the Hyundai Securities headquarters in Yeouido, western Seoul. [NEWSIS]

The announcement of the winning bid for Hyundai Securities is being delayed again, as the third and smallest bidder, Actis, is offering a price as big as the two competing giants, KB and Korea Investment.

EY Han Young, the deal’s facilitator, told bidders on Tuesday that it will again postpone the decision of the final winner until Friday, saying that the seller, Hyundai Elevator, the creditor Korea Development Bank and the firm need more time to review bidding conditions suggested by the three.

It is the second time the facilitator has delayed the announcement, citing the same reason.

The firm was scheduled to make an announcement Tuesday afternoon, after comparing acquisition prices offered by all three bidders - KB Financial Group, Korea Investment Holdings and the Hong Kong-based private equity fund Actis - with the base price suggested by the seller, Hyundai Elevator. The base price is set near 650 billion won ($570 million), an industry insider speculated.

“The bid-hosting parties said they want to take more time in evaluating each bidder by more than just acquisition prices but also consider more business capabilities,” said a representative from Hyundai Group who requested anonymity. “I also heard that the delay was not about battling with the bidding price, but about negotiating details in the sales contract.” 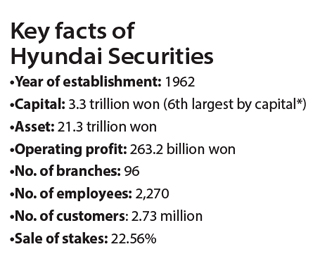 The bid was previously considered a simple competition between KB and Korea Investment, but brokerage industry insiders named Actis as the main contributor to the sudden delay.

Actis was reported to have approached NH Investment & Securities, the nation’s largest brokerage house by equity capital, for funding worth 200 billion won that it needed to call a price as high as the two big brokerages.

Rumors circulated that NH Investment attempted to join the Hyundai bid by funding Actis as a financial investor and make the private equity fund hand over the shares in the future. However, NH officially denied the rumor.

“It is true that NH reached a deal to lend money to Actis, but we do not intend to acquire Hyundai Securities to participate in its management,” the brokerage wrote in a statement on Wednesday. “This was what brokerages normally do at their investment banking departments.”

The rumor came from the fact that Hyundai Securities is the last large-size brokerage house on the local M&A market, which is now the industry’s sixth largest in size. It also used to be No. 1 in the late 1990s, with the success of its hit product Buy Korea Fund.

Analysts said the bidding is being delayed due to uncertainty over whether they will be able to sell the big brokerage to a foreign private equity fund.

“Hyundai Group, the host, must be more than welcome to sell the brokerage to a party that calls a higher price, whoever the winner is,” said an analyst at a midsize brokerage who requested anonymity. “But the industry and government are hesitant because a private equity fund is likely to sell Hyundai Securities again in the future, to profit by selling them at a more expensive price. That’s the nature of a private equity fund.

“The Korean public’s negative view of private equity funds is another factor that puts the bid hosts in a dilemma.”

The bidding host wants to ensure Hyundai will be sold to a brokerage that can actually hold it, after Japanese private equity fund Orix won Hyundai with a 647.5 billion won bid last year, but it later broke the deal at the last minute.