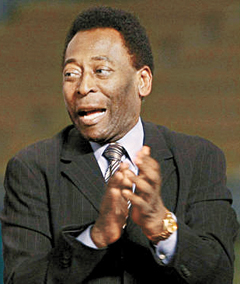 Samsung Electronics is being sued by Pele, the Brazilian football legend, for infringing the copyright of the former player’s image.

He is demanding $30 million in compensation, arguing that Samsung “never obtained the right to use Pele’s identity in any manner or in any format.”

According to media sources from Chicago and The Associated Press on Tuesday, the 75-year-old football great claimed the Korean electronics provider used a look-alike image of him on an advertisement for an ultra-high-definition television that ran in The New York Times in October. He has filed a lawsuit in the federal court in Chicago through his attorney Frederick Sperling.

The advertisement contained no wording or direct mention of Pele, but he says the image of an elderly black man pictured in the ad “very closely resembles” him. The ad shows another image of a white football player performing a “modified bicycle or scissors kick,” which is known as a strong trademark of Pele. 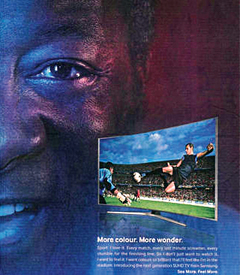 Legendary Brazilian soccer player Pele is suing Samsung Electronics in the Chicago federal court for alledgedly running an advertisement with a figure very similar to himself in The New York Times in October, pictured above. [CHICAGO TRIBUNE SCREEN CAPTURE]

“Samsung apparently felt there was value to Pele’s endorsement,” the Chicago Sun-Times said, referring to a written lawsuit that notes Samsung and Pele had been in negotiations to sign endorsement deals in 2013, but the company pulled out “at the last minute.”

Whether Sperling can win another victory is still in question, since people with knowledge of the Jordan case have noted that the case was more overt compared to Pele’s.