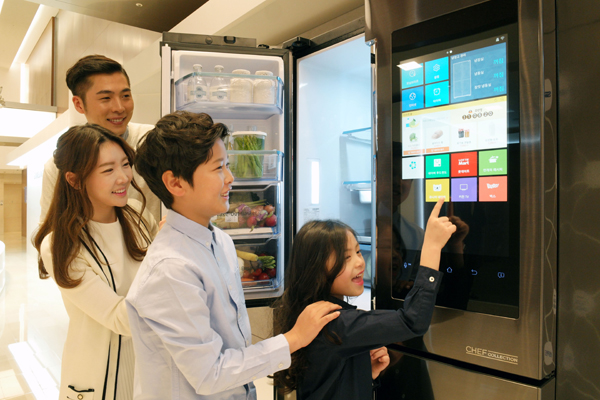 Samsung Electronics on Wednesday unveiled a high-end refrigerator with an Internet of Things function that monitors the contents and can place an online order to refill shelves.

The new product, called “Family Hub,” is the first of its kind equipped with three cameras inside the refrigerator. This enables the owner to monitor what’s inside and set the expiration dates for items through a 21.5-inch full-high-definition monitor installed above the door.

The touch-screen is embedded with online shopping apps such as E-Mart and Lotte Mart, and shows weather, news and real-time transportation information. It also plays music through an internal speaker.

The Family Hub “has entirely changed the concept of the refrigerator, which previously centered around preservation,” Seo Byung-sam, vice president of home appliances at Samsung Electronics, said in a press conference on Wednesday.

“Samsung intends to continue breaking the routine of everyday life and stereotypes, and lead the market with unprecedented types of products.”

The 850-liter (225-gallon) refrigerator comes in only one color, “black caviar,” and carries a price tag of 6.49 million won ($5,600), relatively cheaper than Samsung’s top-notch refrigerators under the “Chef Collection” brand, which cost between 10 million won and 20 million won.

The lower-than-anticipated price tactic is meant to attract consumers in various spending brackets, according to Seo. “Those customers who can afford up to 20 million won refrigerators account for less than 1 percent of total,” he said.

Regarding views that consumer electronics products are increasingly getting complicated and senior citizens may find it difficult to use them, Seo said people get used to them over time and that once consumers are accustomed, they won’t go back.