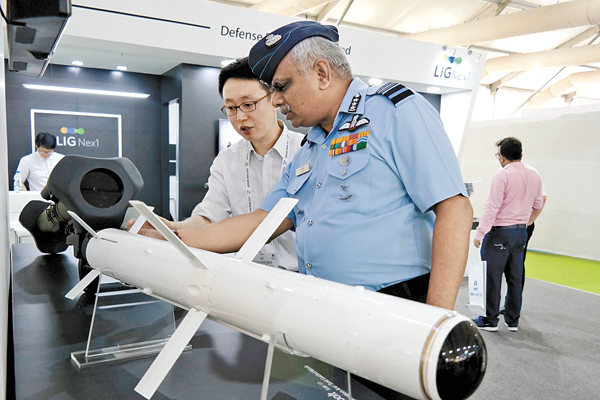 A LIG Nex1 representative, left, explains functions of its missiles to an Indian military official at Defexpo 2014 held in Goa, India. [LIG NEX1]

The manufacturer is currently participating in the Defexpo India 2016, which is being held in Goa.

Some 200 defense related companies from 32 countries are participating in the expo that started on Monday.

LIG Nex1 first became involved in this biennial event in 2012. The expo will last until Thursday.

LIG Nex1 said it seeks to introduce its missile weapons and share its technologies in order to make deals with its Indian counterparts.

“We would like to take this opportunity to strengthen our ties with India and to find new export markets,” said an official at LIG Nex1.

The manufacturer said India is the second-largest weapon importer in the world as of 2014 and that its market size is around at $100 billion.

India also is trying to boost arms exports 20-fold to $3 billion by 2025 and is spending tremendous amount of money to meet the goal.

Currently, Saudi Arabia is the top weapon importer in the world.