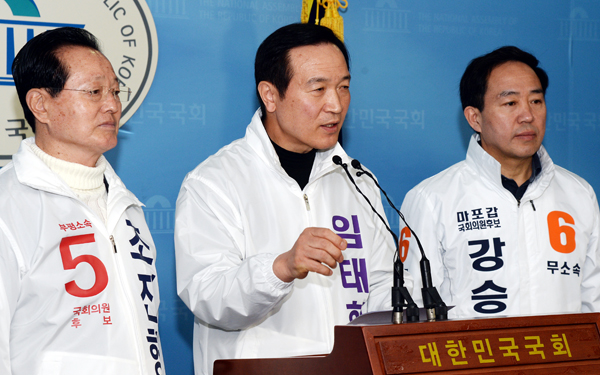 Yim Tae-hee, an independent candidate and former member of the ruling Saenuri Party, speaks during a press conference at the National Assembly on Wednesday to announce the founding of a solidarity group made up of ex-Saenuri members running independently in the April 13 general election. [NEWSIS]

Eight independent candidates who recently left the ruling Saenuri Party following their failure to win nominations for the April 13 general election decided Wednesday to launch a solidarity group fighting against what they call the party’s “undemocratic and partisan” ways.

The formation of the People Who Pursue Righteous Politics group is the latest episode in Saenuri’s ongoing drama, as it struggles to hole up internal fissures less than a month away from the election.

Yim Tae-hee, former presidential chief of staff to Lee Myung-bak, who will run next month as an independent for the Bundang B District in Seongnam, Gyeonggi, officially announced the group’s founding during a press conference at the National Assembly, vowing to gain more members.

“The reason why we’ve come together despite being independent candidates,” said Yim, “is because of these unreasonable nomination procedures, which will continue unless we take action right now by fixing this undemocratic and partisan system.”

Although Yim did not specify how the group will fix internal party mechanics while standing outside the party, he did assert that “Korea has no future” under the status quo.

The seven other independent candidates who joined Yim in forming the solidarity group are Lee Jae-oh of Eunpyeong District B in Seoul; Ahn Sang-soo of Jung, Dong, Ganghwa and Ongjin Districts in Incheon; Kang Seung-kyu of Mapo District A in Seoul; Park Seong-ho of Buk District, Pohang; Lee Cheol-kyu of Donghae and Samcheok; Kim Jun-hwan of Heungdeok District, Cheongju; and Cho Jin-kyeong of Bupyeong District A, Incheon.

Yim told the JoongAng Ilbo that two other ex-Saenuri members also considering joining the pack were Kim Jin-seon of Taebaek, Hoengseong, Yeongwol, Pyeongchang and Jeongseon Counties in Gangwon; and Ryoo Hwa-sun of Paju B.

Mostly made up of former Saenuri members outside the faction loyal to President Park Geun-hye, the new group represents independent candidates who claim the party’s nomination procedures for the upcoming elections mostly favor pro-Park members.

Saenuri members who did receive tickets to the election have counterattacked using varying measures, warning that elected party officials will be punished if they support candidates who abandoned the party.