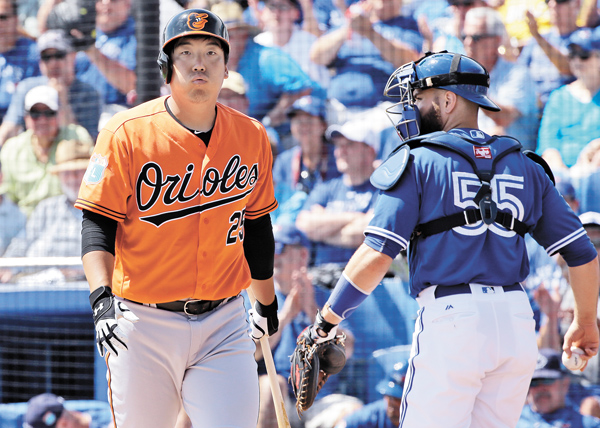 South Korean slugger Kim Hyun-soo of the Baltimore Orioles reacts after striking out in a spring exhibition game against the Toronto Blue Jays on March 15. Kim has been excluded from the 25-man roster for the Orioles and is considering accepting a relegation to the minors. [AP/NEWSIS]

South Korean players have a long history of success in the Major Leagues - just not in Baltimore.

In 2011, Lotte Giants pitcher Chong Tae-hyon joined the Orioles only to fail the team’s notoriously difficult physical test and be sent home. In 2013, the Golden Glove-winning reliever Yoon Suk-min of the Kia Tigers couldn’t obtain his visa in time to make the spring camp, meaning Yoon lost the chance to earn a spot on the roster.

The most recent problem is slugger Kim Hyun-soo from the Doosan Bears, who joined the Orioles as a sure-thing before this year’s spring camp.

His performance has been so disappointing that he might not make it to the regular season.

Confidence was so high in Kim that the Orioles and manager Buck Showalter signed him to a two-year contract worth $7 million. Kim had a storied and decade-long career in the Korea Baseball Organization, which culminated last year in the Bears’ victory in the Korean Series.

When Kim first came to the Orioles, both the team’s coaching staff and local media praised Kim’s sharp eye at bat and ability to reach base.

But after 16 disappointing spring exhibition games, both Showalter and general manager Dan Duquette have already decided to exclude Kim from the 25-man roster to begin the season, and are doing their best to relegate the 27-year-old Korean outfielder to the minor league.

It won’t be easy, because according to Kim’s contract, he has the right to refuse a demotion. The managers’ best bet is to get Kim to step down voluntarily, and according to local Baltimore media, Showalter is trying to make this happen by withholding Kim from any spring games until he chooses to do so.

It’s clear that Kim hasn’t lived up to the expectations so far, recording a meager .182 batting average (BA) with no extra-base hits during his 44 at-bats. His first hit didn’t even come until his 23rd at-bat. Meanwhile, rule 5 draft pick Joey Rickard, who was not considered a contender for a spot on the roster before, has emerged as a clear favorite for Kim’s position after leading the team with a .390 BA while going 23-for-59.

But while Baltimore media has been quick to call for Kim’s ouster, some in Korea have questioned whether or not it’s fair to make a decision about a player valued so highly so recently after just a month of rehearsal games, and have argued that Kim just needs more time to acclimate to the United States and the sport’s most competitive league.

This was an attitude shared by Showalter himself just three weeks ago. When asked about Kim’s performance, Showalter said, “What Kim needs is time, and that he is learning and improving every day. With everything new for him in the United States, Kim needs some time and help to adjust to the playing level in the MLB.”

Before the spring camp, Kim told the JoongAng Ilbo that Showalter had assured him that he had time to find his feet.

“Showalter told me not be burdened by the pressure to adjust to the atmosphere of this place,” Kim said. “He told me to do whatever I need to do and ask him of anything if I need something.”

Kim’s case has gotten the attention of the union for Major League Baseball players, the Major League Baseball Players Association (MLBPA), which issued a statement saying they are watching closely to ensure that the Orioles don’t infringe on the rights guaranteed by Kim’s contract. The MLBPA has the authority to challenge decisions made by clubs.