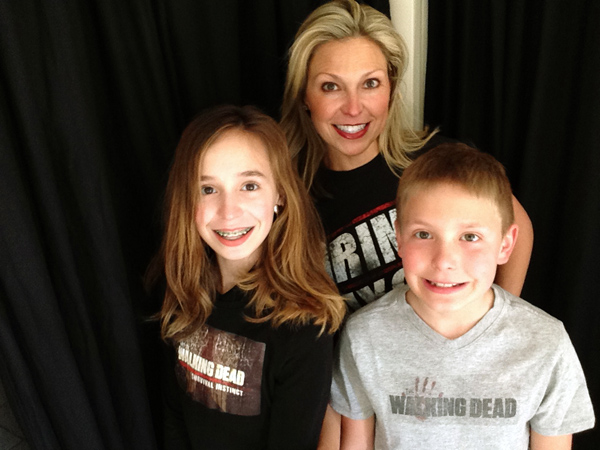 NEW YORK - Michelle Fiala says her 14-year-old daughter, Laura, is fine watching humans run for their lives from snarling, flesh-eating zombies on AMC’s “The Walking Dead,” but if one of the characters vomits, the teen has to look away.

“My youngest has a real thing about seeing people vomit,” the St. Louis mom said in a recent interview. “She’s got a real phobia about that. She’s totally fine when they’re stabbing zombies in the head or there’s fake blood flying or the zombies are eating people, but when [the character] Denise leaned over and threw up ... she had to turn away. She couldn’t handle that.”

Fiala’s 16-year-old daughter, Emma, also watches after the three discovered the hit series on Netflix about a month ago.

Humans battling a zombie apocalypse may not feel like family fare in the grand tradition of “The Ed Sullivan Show,” “The Carol Burnett Show” or “American Idol,” but the family has plenty of company.

Ericka Calcagno of Farmington Hills, Michigan, looks forward to watching the show with her 12-year-old daughter, Gina, and son Jean-Luc, who is 9. She said her husband first introduced her to the series, and her kids were intrigued by their conversations about it.

“I was a little skeptical at first if it was too much but we watched the first season during the day. Since then we always watch together and discuss it constantly.”

Fiala and her kids are caught up to real time so they can enjoy the season six finale Sunday.

“It’s so outside of what would be my usual genre for television,” said Fiala. “I came home from work one day and my kids were sitting on the couch watching like, ‘You have to come watch this!’ I was sucked in pretty immediately. You get sucked in by the characters. We have our favorites. It surprises me still that I’m that into it.”

“‘The Walking Dead’ is like the new ‘Family Ties,’ OK? It’s tying families together,” said actress and playwright Danai Gurira, who plays Michonne on the show. “The thing that’s touched me the most is when I’ve met mothers of adolescent sons who say, ‘This is how me and my son bond. It’s because we both watch the show.’”

At what age can kids handle the gore varies by family.

The violence doesn’t bother Calcagno’s kids. Instead, she says they hypothesize what they would do to survive if zombies were hot on their trail.

Sue Thomas, a mother of three from Waukesha, Wisconsin, watches weekly with her two teens, 19 and 17. She’s decided her youngest can join in a few months when he turns 15, although he’s not happy about the wait.

“He makes sure we know how annoyed he is that we watch and he can’t yet.” AP