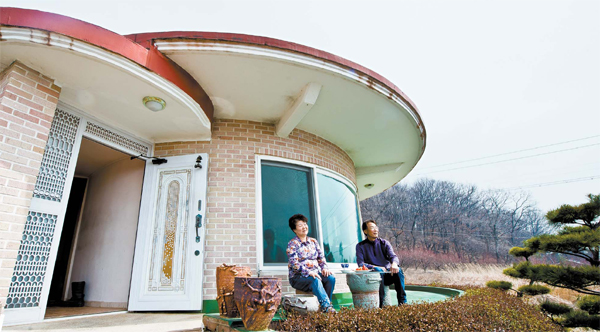 Married couple Kim Tae-ae, left, and Nam Se-bong, both of whom retired recently, spend their weekends at the second house they purchased in Ganghwa County, Incheon. [KIM KYUNG-ROK]

Enjoying a pastoral life, away from the hustle and bustle of the big city, has long been one of the most sought-after dreams of retirees in Seoul.

However, these days many seniors are reluctant to make the change, saying they cannot risk being isolated from their friends or leaving behind the comforts of living in a metropolitan area.

As the number of such people who want to hit two birds with one stone - enjoy a laid-back lifestyle while not giving up being close to friends and family - is continuously rising, the “second house” trend has emerged as a nice alternative.

The newly coined term indicates a situation where the homeowner keeps his or her original residence in an urban area while purchasing another countryside house, located not far from the city.

This way, they can shuttle back and forth between the two homes, not missing out on important gatherings taking place in the city while also having the time to relax at their quieter residence, looking after their vegetable garden.

As some of the best candidates for such frequent commuting, Yangpyeong and Gapyeong in Gyeonggi and Ganghwa County in Incheon, all of which are no further than a two-hour drive from the capital city, are rising as havens for those who are browsing for their second houses.

“In the past four to five years, Ganghwa County has been getting the limelight as the most suitable area to build or buy second houses,” said Yoon Jae-ho, a representative of the consulting company Metro Consulting.

“It means more than just owning an extra house. While the first house holds more of an importance for family, where the family members gather and mingle, the second house is more about having your own space,” Yoon said.

“The first house was bought due to necessity and responsibility, but the second one is different. It is realizing your dream house,” he added. 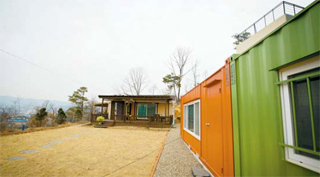 Pyo Seon-hee, 54, who purchased property in Ganghwa County in 2009 with three of her sisters, recently built a two-story country house there.

According to Pyo, it is a dream come true for all four sisters, who have only ever lived in apartments.

Every weekend, the Pyo sisters gather at their country house to spend time together, having tea in the garden and cultivating vegetables. The size of the garden may not be vast, but they said they have planted at least 100 cabbages along with peppers, onions, potatoes and herbs like ruccola and thyme.

The sisters say the quality of their lives completely changed after they built the second house.

“When I look out the window from the second floor, I see my kids playing in the water pools and in the green house. And we have plenty fresh of vegetables on our table right from the garden. Being part of such an experience itself is healing and happiness,” she added.

Surprise visits by wild animals are another fun part of living in such a place.

“A few years ago, when I visited the house on the weekend, all of the vegetables I had planted in the back garden were gone,” said second sister Pyo Jeong-hee. “Later, I found out that an elk had come down from the mountains and devoured all of it. I was dumbfounded and upset at the same time, but I laughed so hard afterward.

“I could absorb the changing seasons and realize that I was coexisting with nature. All of these aspects are something I have never felt when living in a city,” she added. 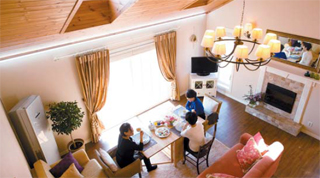 Pyo Seon-hee and her two sisters gather around the table at their second house in Ganghwa County, which they purchased together.

Nam Se-bong, who built his own second house in Ganghwa County in 2001, is another beneficiary of the recent real estate trend.

“When I was working and traveling to other countries for business purposes, I was so envious of people who had their own gardens in their houses,” Nam said. “I told myself at the time that I would live in a house with a garden when I retire.”

But looking for just the right place for his second house required a considerable amount of time and effort by Nam and his wife.

After crisscrossing the country in search for several years, the couple finally settled on Ganghwa County, drawn to its location near both the mountains and the sea.

“Out of our living room window we see the ocean, and behind our house roe deer come by from time to time,” said Kim. “Our neighbors who have fishing boats bring us batches of tiny shrimp and we pickle them to share with the rest of our family.”

In recent years, the couple has been spending more time in the countryside and has been visiting their residence in the city only on special occasions.

“You know, when you get older, you realize how precious it is to mingle with nature,” Kim said. 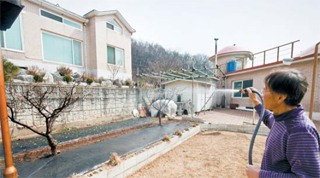 Nam Se-bong waters lettuce, one of the vegetables he planted in the garden outside his second house.

Owning a second home is not a trend only confined to Korea.

“In the U.S., too, there has been a rising number of people owning two houses, and people used to call them splitters. These people were born during the baby boom period from 1945 to 1965 after World War II, and when they were reaching the age of retirement, this trend emerged,” said Kim Kyung-rae, a representative of the OK Sigol, a consulting company for real estate in the countryside.

In Korea, it was after 2010 that owning a second house became popular enough to form a trend, and the time coincided with when baby boom generation (those born between 1955 and 1963 after the Korean War) was starting to retire.

In the past four to five years, people have been showing interest in countryside real estate, not as a source of assets but as a real place to live, according to industry insiders.

In particular, Ganghwa County has become the most popular option because of its easy accessibility from Seoul, enabling what’s called “multi-habitation.”

“Technically, a second house has to be within 150 kilometers of your original house, which means that it has to be reachable within 2 hours by car,” said Ko Jong-wan, chief of the Real Estate Asset Management Research Institute. “If you are based in Seoul, that would mean your second house has to be located at areas like Yangpyeong, Gapyeong, Yongin and Ganghwa County. Anmyeon Island is your farthest option.”

Song Yang-min, a professor of Healthcare Management at Gachon University, also noted that “a lot of retirees are focused on finding a house where they can enjoy clean air and scenic views. But that is misjudgment, because accessibility has to be their priority.”

Feeling connected to people who are still living in urban areas, he says, is a crucial factor to maintaining a healthy lifestyle after retirement.

“I can get to my second house by car in one-and-a-half hour, and 30 minutes more if I take a public transportation,” said Kim Gab-jung, who recently set up a second house in Ganghwa County.

Not at all extravagant, the place is 33 square meters in size and made of a container and timber.

“It is not a place of dwelling for me, but a place where I can relax for a few days,” Kim said. “After retirement, it is as important to stay connected to your friends as it is to mingle with nature. But if you just look for a place to enjoy the countryside, it is hard for your friends to come visit, and it is like isolating yourself.” 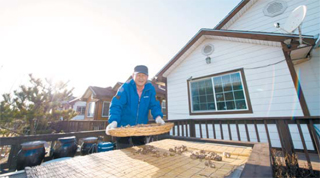 Jeong Yeong-cheol gathers a handful of potatoes he harvested from his vegetable garden in Ganghwa County.

This is not the first time that owning a country house has become somewhat of a boom in Korea.

In the late 1970s when Korea was undergoing rapid economic development and urbanization, those who had saved up enough money returned to their hometowns in the countryside to live more idyllic lives. In those times, people built luxurious villas to show off their wealth.

“It is in the 1980s that the term suburban house came into use,” explained Han Tae-wook, a professor of business administration at Dongyang Mirae University.

However, nowadays preferences have shifted away from extravagant countryside homes to smaller ones.

“Interest is far higher and continuously rising in buying cost-efficient homes, where you can enjoy the relaxation of the pastoral area with the least amount of investment,” said Kim from OK Sigol.

Kim Gab-jung also said that large countryside homes are not able to satisfy the requirements of retirees.

“The house becomes another source of stress and burden, while the purpose of purchasing the house was getting away from all of that,” he explained.

A house no bigger than 20 square meters is a good size for a couple’s second home, real estate experts say.

In that sense, considering the house as a source of investment with which to earn money in the future is definitely something to be avoided.

“It is a venue of healing. You shouldn’t think of it as financial matter,” said Jeong Yeong-cheol, who has been visiting his second house in Ganghwa County every weekend with his wife for the past three years.

“Every Friday, when I get off work, I come straight here instead of going to my original house,” he said. “As soon as I get here, I get comfortable and relaxed. What you need to do at your second house is to enjoy this feeling as much as you can.”