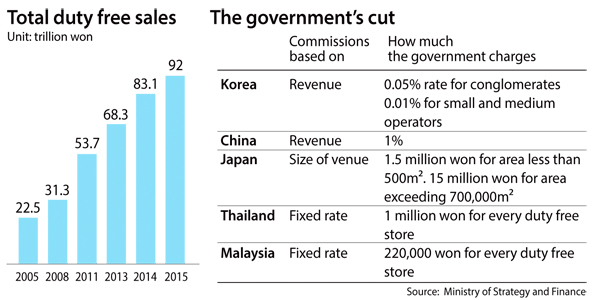 The Ministry of Strategy and Finance on Thursday decided to extend duty-free shop licenses from five years to 10 years while raising the commission rates charged on the operators.

Licenses that could be lost after five years resulted in job insecurity for employees and discourages companies from investing, it said.

But the government delayed a decision on whether to grandfather the extensions to include duty-free stores at the Lotte World Tower and Walkerhill Hotel, which are expected to close in the next couple of months, resulting in lots of layoffs. Competitors, naturally, are opposed to extensions, especially for Lotte, which dominated the industry for years.

“We will guarantee a stable business environment by extending the duty-free operation period while continuously renewing the permits,” Finance Minister Yoo Il-ho said during an economic ministers’ meeting in Seoul on Thursday. “Additionally, by raising the commission rate, we will expand the social contribution made by the duty-free industry”

In 2013, the government reduced duty-free licenses from 10 years to five after lawmakers complained about a few large players like Lotte dominating the business.

Last year, the duty-free industry in Korea had revenue of 9.2 trillion won ($8.1 billion), according to the ministry, which is the largest in the world. Korea’s duty free industry accounts for 12.3 percent of global duty-free revenue. In second place, China accounted for 7.7 percent, and the United States accounted for 5.9 percent.

Conglomerates raked in the lion share of the revenue, 87.3 percent. The top two operators, Lotte and Shilla, took 79.6 percent.

The government estimates that 2,122 workers from Lotte World Tower and SK Networks’ Walkerhill store, which failed to get renewals on their licenses last year, will lose jobs. Among the 1,984 Walkerhill employees, only 64 were able to transfer to another duty-free operator.

“We came to the conclusion that limiting the permit period to five years not only discourages operators from making investments and therefore reduces the industry’s competitiveness, it also increases job insecurity,” a ministry official said.

The government also decided to raise the commission charges on operators from the current 0.05 percent of annual revenue to between 0.1 and 1 percent depending on the size of revenue. Small and midsize operators, however, will continue to enjoy the low commission rate of 0.01 percent.

The government said it will spend half of the increased commissions to promote tourism, which provides most duty-free customers.

The government also changed its evaluation criteria for extending a permit for another 10 years. If a single operator has more than 50 percent of the overall revenue for the industry, that will be a negative factor. The same will be true if less than three operators control 75 percent of duty-free revenue.

Newly licensed operators, including Hanwha Galleria Timeworld, Shinsegae and Doosan, have opposed the possibility of Lotte World Tower having its duty-free license extended.