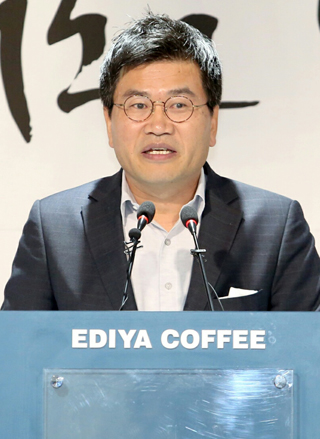 Ediya Coffee, a moderately-priced homegrown coffee franchise, took the wraps off a new headquarters building in southern Seoul and announced a 1 trillion won ($875 million) annual revenue goal by 2020 as it celebrated its 15th anniversary on Thursday.

“We intend to spearhead the nation’s coffee culture as the leading homegrown coffee brand,” CEO Moon Chang-ki said in a press conference at the new headquarters in Nonhyeon-dong, southern Seoul. “The next five years until 2020 will be the most meaningful period for the domestic coffee industry.”

To achieve the 1 trillion won target in 2020, the company aims to add 1,000 outlets to the almost 2,000 currently in operation and diversify its portfolio. Almost 64 percent of all stores are located in the Seoul metropolitan area. The Gyeongsang region has the second-largest number, 350 stores. Moon hopes to raise the company’s foothold in other regions.

The company wants to ramp up retail sales of Beanist instant coffee, which Ediya developed in 2012. Currently, it is available at franchises, but Moon wants to sell it at supermarkets, convenience stores and online stores.

Ediya also plans to open its first overseas store by the first half of next year, either in the United States or Southeast Asia, and wants to open over 200 stores around the world by 2020. Its overseas annual revenue target is 100 billion won or more.

The new Ediya headquarters is eight stories above ground and has three stories below. All of the employees from the previous headquarters in Yeomchang-dong, western Seoul, moved to the new building on Thursday. The first and second floors are home to the Ediya Coffee Lab, where research and development activities take place and customers can try out different varieties of coffee.

The 54-year-old CEO acquired the then-fledgling Ediya chain in 2004 after he retired as a banker in the wake of the Asian financial crisis. In just 12 years, the number of outlets spiked from 80 to almost 2,000 on the strength of their above-average quality and reasonable prices.

A consumer satisfaction survey of the top seven coffee franchises in terms of annual revenue by the Korea Consumer Agency in December ranked Ediya No. 2 after Starbucks. Ediya topped the price satisfaction category. Ediya can set prices lower because it doesn’t pay royalties to overseas headquarters.