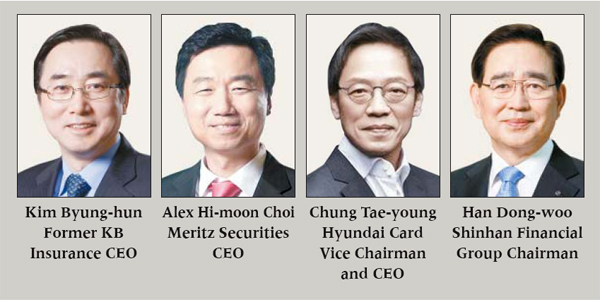 The top-paid executive in the local financial industry was Kim Byung-hun, the former CEO of KB Insurance, whose salary reached 3.347 billion won ($2.935 million) last year, according to local corporations’ 2015 business reports submitted to the Financial Supervisory Service (FSS) on Wednesday.

More than two-thirds of his salary, worth 2.83 billion won, was severance pay. Kim served as an executive at the insurer for 19 years and one month, long before the insurer was acquired by KB Financial Group. It was formerly called LIG Insurance

Shinhan Financial Group Chairman Han Dong-woo was paid 1.22 billion won for his annual salary last year. His pay surpasses Kim of KB Insurance, when the incentives in cash and in the group’s stocks he received last year are added.

As Han received incentives worth 3.35 billion won in the first quarter of last year for his performance in the 2011 to 2013 business years, his total salary amounted to 4.55 billion won. 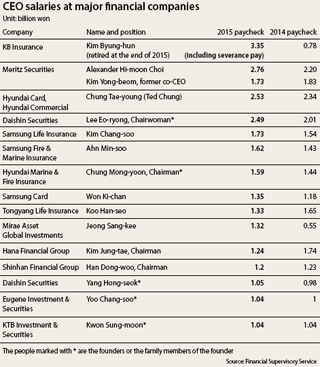 In the brokerage sector, heads of firms that performed well last year got paid more.

Korea Investment & Securities CEO Ryu Sang-ho, who recently was re-elected to be the brokerage’s CEO for the 10th year, was paid 1.72 billion won. This was the top level as a non-owner family member CEO.

Daishin Securities Chairwoman Lee Eo-ryong, who also is an owner, was paid 2.49 billion won last year, while his son Yang Hong-seok, now the CEO and president of the brokerage house, received 1.51 billion won.

“Under the contract, Yoon is supposed to receive his performance incentives in the group’s stocks after he retires in November next year,” said a representative from KB Financial Group. “He will receive the stock incentive only from the group.”

Chairmen of the nation’s three financial groups KB, Shinhan and Hana have voluntarily returned 30 percent of their monthly pay since last September as a means of expanding employment.

Among local insurers, CEO pays were highest at Samsung affiliates.