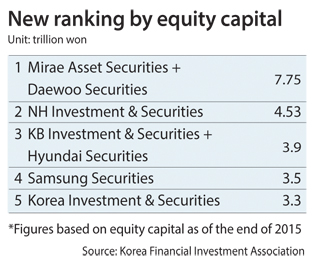 KB Financial Group, one of the four largest financial groups in Korea, has been selected as the preferred bidder to take over Hyundai Securities, beating Korea Investment Holdings and Hong Kong-based private equity fund Actis.

Hyundai Group, the largest shareholder of the securities unit, said on Thursday that it has notified KB Financial Group of the decision.

How much KB will pay for a 22.56 percent controlling stake in the securities brokerage firm was not revealed. According to market predictions, the three contenders had bid between 700 billion won ($614 million) and 800 billion won.

“The bidding price may be unveiled later, but we cannot confirm it yet,” a KB spokesman said.

The financial group received the highest score among the three candidates that submitted letters of intent on March 25. Korea Investment Holdings was a strong contender, but the group said that KB was given more points for its financial transaction settlements and some discount conditions.

The combined capital of the securities units of KB and Hyundai will be 3.9 trillion won. The acquisition is expected to enhance the securities business of the financial group whose portfolio has been concentrated on the banking business.

Hyundai Group put up 22.56 percent of the brokerage’s shares, worth 300 billion won, for sale on Feb. 3, seeking cash to rescue its affiliate Hyundai Merchant Marine, which is seriously short of liquidity.

Of that 22.56 percent, 22.43 percent is currently owned by the troubled shipper. The remaining 0.13 percent belongs to the group’s chairwoman, Hyun Jeong-eun, and other owner family members.

Since the sale is part of efforts to restructure the struggling group, Hyundai has been careful to choose a bidder that will ensure swift access to funds.