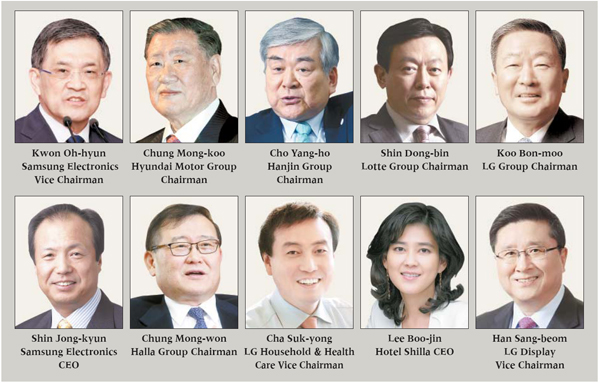 Samsung Electronics Vice Chairman Kwon Oh-hyun was the highest-paid executive in the country last year, outpacing the chairmen of leading Korean conglomerates like Hyundai Motor’s Chung Mong-koo or even members of the Samsung family like Lee Boo-jin, according to regulatory filings submitted by the companies on Wednesday.

However, the figures only account for annual salary and bonuses received last year, and do not include properties and stocks owned by the executives. The list also did not include non-registered executives like Lee Jae-yong, the Samsung heir-apparent and vice chairman.

According to filings, Kwon of Samsung Electronics took home 14.95 billion won ($13.11 million), a near 60 percent surge from 2014’s 9.39 billion won. Most of his income came from bonuses and incentives, which totaled over 12.8 billion. His annual salary was 2.08 billion won.

Kwon led the flagship of Korea’s leading conglomerate to record-breaking performances in the device solutions division, which includes semiconductors.

Samsung Electronics said Kwon’s compensation was also substantial because of his expansion of the company’s capacity in memory chips and his help in developing new technologies.

But not all top executives at Samsung Electronics saw bigger checks.

Samsung Electronics CEO Shin Jong-kyun, who was the highest-paid executive in 2014, saw his paycheck drop 67 percent year on year from 14.57 billion won to 4.8 billion won. 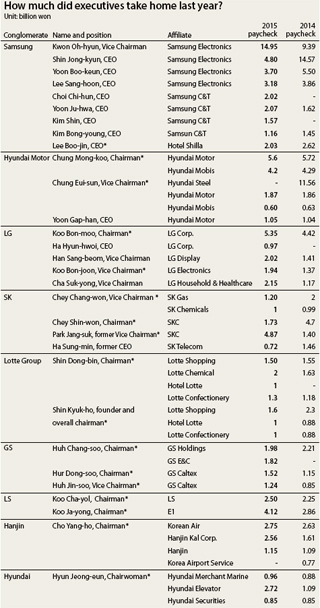 This year, paychecks were highly correlated with performance.

Cha Suk-yong, vice chairman of LG Household & Health Care, was another executive well rewarded for improving the company’s performance. His paycheck nearly doubled, from 1.17 billion won to 2.15 billion won, in response to the company’s market cap rising more than 70 percent.

On the other hand, both Hyundai Motor CEO Yoon Gap-han and Posco CEO Kwon Oh-joon saw their paychecks barely change after their companies saw average performances.

Registered executives at petrochemical companies saw their salaries increase compared to the previous year as performance improved. Executives in the shipbuilding industry, on the other hand, saw their annual salaries barely exceed 1 billion won after a particularly brutal year.

Among the executives who are founders or family members of the founder, Chung Mong-koo of Hyundai Motor Group topped the list by pocketing 9.8 billion won last year in both pay and bonuses. Still, this is a drop from the 21.5 billion won he took home a year earlier, largely because he didn’t get paid by the automaker’s steel manufacturing affiliate, Hyundai Steel, from which he resigned in March 2014. That year, he took home 11.6 billion won from the company, 10 billion won of which was severance pay. 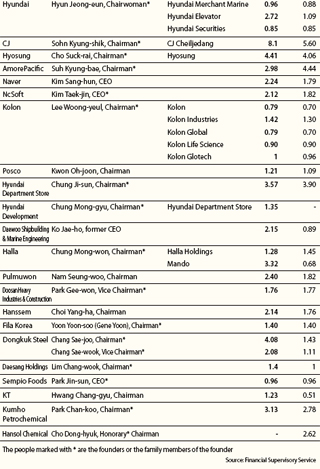 SK Group’s Chey Tae-won, who was pardoned by President Park Geun-hye from a prison sentence in August last year, was not included on the list of executives as he was only reregistered as an executive on March 18.

Lee Boo-jin, CEO of Hotel Shilla and the eldest daughter and second child among Chairman Lee Kun-hee’s three children, was the only member of Samsung’s founding family who revealed the paycheck she received for last year. She made 2 billion won.