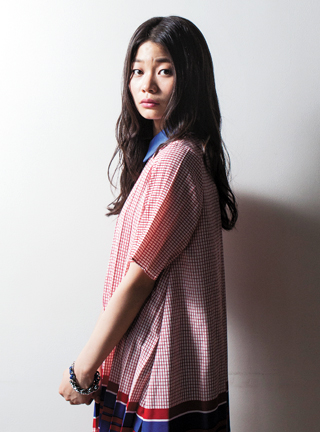 Delicate yet sturdy is the main character, Ha-dam, in the upcoming independent film “Steel Flower.”

As if she is thrown into a battlefield robbed of her shield and weapon, the orphaned and homeless Ha-dam roams about the coastal city of Busan, looking for a place to rest her shivering body and a means to fill her empty stomach.

The hapless girl cannot afford to interact with the world as she has been hurt so many times before. At her best, she mumbles and shouts, “I can do this well,” before she is offered a number of trivial part-time jobs, only to be ripped off in the end.

Then, a light of hope appears when she is magically drawn to the sounds of a tap dancing class. From then on, the jaunty sounds of tap shoes become her voice, her friend and her passion.

The tone of the film is utterly bitter and it contains few spoken lines.

However, what imbues life into the film is none other than its lead actress, Jeong Ha-dam, who gives a penetrating performance throughout. From the way Ha-dam walks awkwardly to how she clenches her fists when nervous, the actress embodies the character from head to toe.

Jeong is arguably the most buzzed-about up-and-coming actress in the Korean film scene at the moment. But surprisingly, “Steel Flower” is only her second feature film where she plays a major role.

What is more surprising is the fact that the 23-year-old has never actually studied acting, and never imagined herself becoming a professional actress before “Steel Flower.”

“I studied political diplomacy in college just because I wanted to learn about sociology. I didn’t think what you learn in college connected to what you do for a living” said Jeong, dressed in a vibrantly colored bohemian-style dress, in a recent interview with the Korea JoongAng Daily.

“I joined an acting club when I was in high school and enjoyed it very much,” she continued. “The memory of it eventually became a starting point for pursuing a career as an actress.”

Jeong debuted in the 2015 film “Wild Flowers” by Park Suk-young, who also directed “Steel Flower.” The latest film is the second in the three-part “Flower” series. Then, she briefly appeared as a haunting Shaman in last year’s exorcism film “The Priest.” 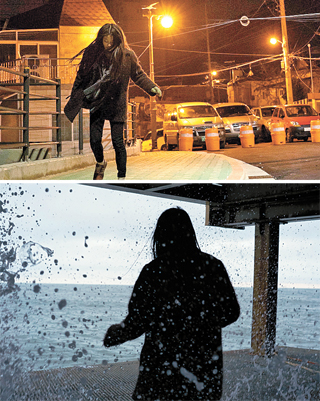 Her appearance may not have been long, but her presence surely was formidable. Notable director Lee Hae-young mentioned her in a recent talk show, calling her an “unbelievable actress.”

“Because I didn’t learn acting professionally, I didn’t have any standards when I was doing it, but I always made sure that I tried very, very hard,” she said.

Perhaps for this reason, Jeong revealed that until “Steel Flower,” she wasn’t sure if she was headed in the right direction.

“I was always uncertain [about my acting] and told director Park last year that I wasn’t happy as I expected after finishing ‘Wild Flowers’,” she said. “But for ‘Steel Flower,” I felt a sense of relief after watching the film. The sublime and strong beauty I felt with its screenplay was well-conveyed on the silver screen as well.”

As she said, Jeong didn’t possess any particular skills to portray the complex world of Ha-dam to the viewers. She believed that if she “loved” Ha-dam, the viewers would understand.

“When I first went down to Busan and started shooting, I was dumbstruck because the Ha-dam I read and understood from reading the script and the one I had to really act out was quite different,” Jeong said. “I thought I understood her well enough, but I was completely in over my head. So I decided to start from scratch.”

From deciding which belongings to put in the suitcase - Ha-dam’s one-and-only piece of property - to buying the ragged sneakers, the soles of which Ha-dam constantly glues back together, she filled in the missing details of the character.

“At first, it felt really vague, but step by step, [the character] got more precise and expanded at the same time.”

Just has she gradually got to know her character, Jeong’s presence in the Korean film scene is expected to expand as well.

Currently, she is involved in two projects: Park Chan-wook’s thriller “Handmaiden,” in which she took on a minor role of one of the handmaids, is set to come out, and she will receive the script for the final installment of the “Flower” series, temporarily titled “Jaekkot,” which she expects to be finished in May.

“The third one will be quite different from the previous two, because unlike Ha-dam, who was orphaned, this time [my character] has a mom and a brother,” Jeong said.

When asked if she has any role models as an actress, she didn’t hesitate to name veteran actress Kim Hye-ja.

“When I see her on screen, I feel a positive aura,” she said. “I want to see her more and become more curious about her. As I age, I want to become like her too.”