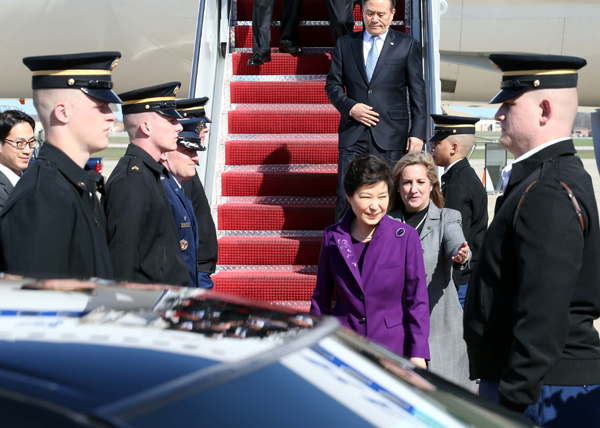 WASHINGTON - President Park Geun-hye went into diplomatic overdrive on Thursday to pressure North Korea to abandon its atomic weapons program after she arrived here to attend an international conference on nuclear security.

Park arrived in the U.S. capital on Wednesday, and a series of bilateral and trilateral meetings with global leaders was scheduled on the sidelines of the Nuclear Security Summit to address the North’s fourth nuclear test in January and long-range missile firing in February.

In bilateral summits with her U.S., Japanese and Chinese counterparts Thursday, Park was expected to address not only the North Korea issue but also other sensitive matters including a recent settlement between Seoul and Tokyo on Japan’s wartime sexual slavery of Korean women.

The diplomatic marathon was scheduled to begin with a bilateral summit with U.S. President Barack Obama around 10:30 a.m. A trilateral meeting of Park, Obama and Japanese Prime Minister Shinzo Abe was to immediately follow.

According to the Blue House, the trilateral summit will be the seventh of its kind. The last such meeting took place in 2014 in The Hague on the sidelines of another Nuclear Security Summit.

“Because the international community’s united determination is important to bring about a change in the North’s attitude, Park is expected to stress efforts to forge a strong coalition with other countries based on this trilateral cooperation,” the Blue House said Thursday morning ahead of the meeting.

The three leaders were also scheduled to address the press following the meeting to issue personal warnings to the North.

Park was then scheduled to meet with Abe one-on-one. In addition to the North Korea issue, they are expected to address one of the thorniest topics between the two countries: the recent settlement between Seoul and Tokyo on the issue of the Japanese military’s sexual enslavement of Korean women during World War II.

In the settlement reached last December, Japan agreed to offer a government apology and multimillion-dollar fund for victims. The foreign ministries of Korea and Japan agreed that the settlement was “final and irreversible” as long as Japan faithfully followed through with its promises. However, Abe and other right-wing Japanese leaders have made remarks since denying its military used any force in mobilizing the women into brothels.

“Using this opportunity, the two leaders are expected to reaffirm the importance of complete implementation of the settlement of the comfort women issue,” the Blue House said.

In a written interview with Bloomberg News before the nuclear security summit, Park also made clear that South Korea and Japan must overcome their lingering bitterness to better confront the North’s threats.

“The issues related to history have continued to be a stumbling block to the development of a future-oriented bilateral relationship,” Park said referring to Japan, Korea’s former colonial occupier.

On Thursday afternoon, Park was scheduled to meet Chinese President Xi Jinping. It will be their first bilateral summit since the North’s nuclear and missile tests earlier this year.

“The two leaders are expected to reaffirm their willingness to continuously deepen Korea-China relations by expanding ties concerning mutual interests, despite pending challenges such as the North’s nuclear crisis,” the Blue House said.

The summit, the seventh meeting between Park and Xi, is expected to test her years of efforts to deepen Seoul’s relations with Beijing. After Park traveled to Beijing to watch China’s largest-ever military parade in September 2015, speculation was high that the South had replaced the North as China’s favorite Korea.

Despite such diplomatic efforts by Park, Beijing hesitated to put pressure on Pyongyang after the North conducted its fourth nuclear test on Jan. 4. Frustrated by Beijing’s inaction, Park sent a strong message to China by saying Seoul was considering the deployment of a U.S.-led missile shield in the South, which Beijing opposes. Nearly a month after the nuclear test, Park and Xi discussed the North over the phone on Feb. 5, 2016.

In the interview with Bloomberg, Park said Seoul will actively cooperate and communicate with Beijing to address the latest security crisis.

Sending a stern warning message to the North that it will face ”unbearable, severe” consequences if it continues provocations is key, Park said. “I have an expectation for China to continue to play a constructive role,” she said.

“Park clearly intended the interview to be released shortly before her meeting with Xi,” a senior government official told the JoongAng Ilbo on the condition of anonymity. “She was giving Xi a heads up that a strong warning should be issued to the North.”

The two leaders are also expected to discuss efforts to deepen cooperation on other issues. It was not disclosed whether the thorny issue of the United States’ deployment of the Terminal High Altitude Area Defense (Thaad) system in the South would be discussed.

“Park’s meeting with Xi itself is an incredible pressure on the Kim Jong-un regime,” a senior Foreign Ministry official said.

The Chinese president and the young North Korean ruler both took office in 2012, but their relationship has been rocky due to the North’s repeated nuclear and missile tests. Although China is the North’s main military ally and largest economic patron, Kim has not visited China. No meeting between Kim and Xi has taken place.

“We have high expectations that the Park-Xi summit, taking into account its timing and circumstances, will serve as important momentum to resolve the nuclear crisis,” said Foreign Ministry spokesman Cho June-hyuck.

“This is meaningful because the rupture in Seoul-Beijing relations, emerged after the North’s nuclear test, is now restored,” Yun Duk-min, chancellor of the Korea National Diplomatic Academy, told the JoongAng Ilbo. “It is a summit to reaffirm that China will participate in the international sanctions as a reliable partner to end the North’s nuclear programs.”

Ahead of the Washington trip, Park issued a direct warning to North Korea that it is walking on the path of “self-destruction” if it continues its nuclear weapons program. In the Bloomberg interview, Park said she will keep squeezing the North through international sanctions because it is the “only way to ultimately achieve genuine peace by inducing changes in the North.”

In the interview, Park also rejected growing demands in the South that the country arm itself with nuclear weapons.

“I have a strong conviction that the vision of a nuclear-free world must start from the Korean Peninsula,” she said.