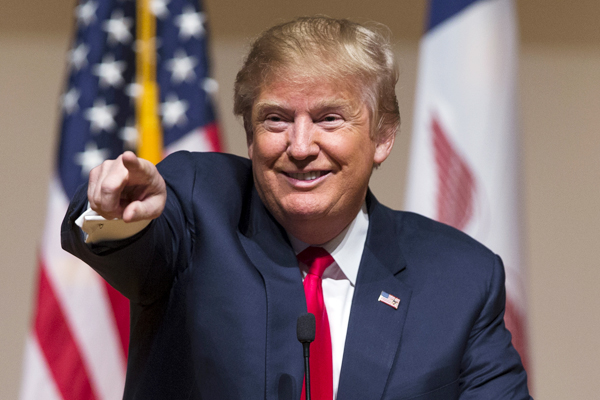 Republican front-runner Donald Trump has revealed, if elected U.S. president, he would enact policies that could jeopardize Washington’s ties with Seoul and Tokyo and destabilize regional security.

Analysts are puzzled and increasingly alarmed by the strong support the real-estate mogul is receiving in the United States, especially as the November presidential election draws closer and he continues to reveal a weak understanding of foreign affairs and security issues concerning U.S. allies.

From Seoul’s perspective, the three pillars of Korea-U.S. ties are their mutual defense treaty, their peaceful nuclear energy cooperation agreement and their free trade agreement, but a Trump presidency could potentially threaten all three.

Koreans are therefore worried about what to expect from Trump’s continued popularity during the electoral race, as his statements indicate he is open to overturning the two countries’ existing military alliance and bilateral relations should he be elected.

“Trump’s remarks do not show a sense of introspection on what their results would bring about; he does not know the gravity of what he says,” former Vice Foreign Minister Choi Young-jin, a professor at Yonsei University’s Graduate School of International Studies, told the JoongAng Ilbo.

“The nuclear armament of South Korea and Japan not only threatens U.S. security but could invoke a rift in the Nuclear Non-Proliferation Treaty (NPT) system, and thus a collapse in the global nuclear nonproliferation regime,” said Choi, who also served as a former ambassador to the United States. “These policies are ones that will not be able to last long or be realized.”

Since announcing his candidacy, Trump has made remarks undermining the South Korea and U.S. military alliance, inaccurately insisting that Korea paid virtually nothing for the upkeep of some 28,500 American troops stationed in Korea.

In an interview with The New York Times published Saturday, Trump suggested South Korea and Japan could develop nuclear arsenals and American troops could be withdrawn from both countries if he becomes president. Seoul and Tokyo cannot be expected to remain under the U.S. nuclear umbrella, he added.

In a town hall meeting presented by CNN Tuesday, Trump said, “At some point we have to say, you know what, we’re better off if Japan protects itself against this maniac in North Korea, we’re better off, frankly, if South Korea is going to start to protect itself.”

When asked whether he truly believes Seoul and Tokyo are better off with nuclear weapons, he replied, “It’s going to happen, anyway. They’re going to start having them or we have to get rid of them entirely.”

Trump added that Washington cannot “afford” to protect nations all over the world, and when asked if there is no benefit for the United States in having a secure Asia, he replied, “There’s a benefit, but not big enough to bankrupt and destroy the United States.”

But the White House on Wednesday slammed Trump’s proposals that South Korea and Japan should develop their own nuclear arsenals to counter threats from North Korean, saying it would be “incredibly destabilizing.”

He added the idea “doesn’t make any sense,” and underscored that Washington “will stand shoulder to shoulder” with South Korea and Japan “as they confront the nuclear menace coming from North Korea.”

The development of nuclear weapons by Seoul or Tokyo is a sensitive issue, particularly as this could spark a nuclear arms race in the Northeast Asia region.

The South Korean Ministry of Foreign Affairs on Tuesday responded by saying the government “holds a consistent and firm position on the issue of a denuclearized Korean Peninsula.” Foreign Ministry spokesman Cho June-hyuck further added that the Korean government is closely monitoring the U.S. presidential campaign and the candidates’ foreign policies and working on outreach to the camps of major candidates including Trump.

A South Korean government official said, “Even though he is a politician of a third country, we have reached a situation where we cannot take no action.”

President Park Geun-hye emphasized in an interview with Bloomberg News on Thursday, published ahead of her visit to Washington for the Nuclear Security Summit, that South Korea believes in getting rid of nuclear weapons, not developing them as suggested by Trump.

“I have a strong conviction that the vision for a nuclear-free world must begin with the Korean Peninsula,” said Park. “The Korean government maintains an unwavering stance in support of denuclearization.”

Trump’s disregard for the concept of nuclear nonproliferation has drawn scrutiny from U.S. analysts and media as well.

Michael Green, senior vice president for Asia at the Center for Strategic and International Studies (CSIS) and former senior director of Asian Affairs during the George W. Bush administration, told the Wall Street Journal Wednesday, “This is the first time you have the likely top of the ticket of one of the two parties attacking the pillars of stability of American leadership in Asia since World War II.”

Green described Washington’s nuclear umbrella as being “the linchpin of American leadership in Asia.”

The Times reported Wednesday in “Trump wants to free the nuclear genie” that the entire U.S. nuclear arsenal accounts for only about 10 percent of the Pentagon’s annual $600 billion budget. This mostly would be to continue to deter China and Russia and because the cost of including Japan and South Korea under the U.S. nuclear umbrella is “minimal,” it reported.

Analysts here are worried about the repercussions of Trump’s remarks and the strong support he has garnered.

Chung Sung-yoon, a researcher at the Korea Institute for National Unification, said, “Even if Trump takes office, the White House mechanism and system will not enable him to act as he speaks of right now.

However, Namkoong Young, political science professor at the Hankuk University of Foreign Studies, warned of the effect Trump’s popularity could have on the American public.

“As a businessman, he uses a method that directly scratches what the public wants,” the professor said. “What is important here is that in terms of U.S.-Korea relations, Trump’s remarks can become disgruntlements that more Americans than expected will also have, regardless of who becomes president.”