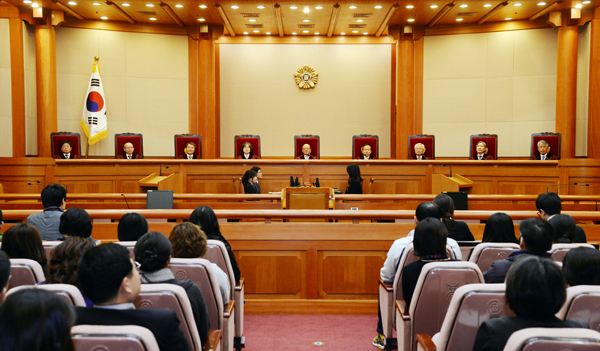 The Constitutional Court upheld on Thursday the anti-prostitution law, which criminalizes the selling and buying of sex.

The court ruled that the law is constitutional in a 6 to 3 vote.

“Although recent trends in our society value self-determination of an individual’s sexual behavior, the act of selling and buying sex cannot be accepted or justified,” the Constitutional Court said.

It added that the government can deny such individual rights to prevent exploitation and protect moral values in society.

“It is a priority for the state and society to make an environment in which women can earn a living without selling sex, rather than solving problems of discrimination and violation of prostitutes’ human rights by legalizing prostitution.”

The court’s review started in 2013, when a woman in her 40s surnamed Kim filed for a constitutional review of the law after she was accused of selling sex for 130,000 won ($110), claiming that punishment of voluntary prostitution is a violation of basic human rights and the freedom to choose a job. She asserted it was excessive to punish sex workers who have no choice but to sell their bodies to earn a living.

Prostitution in Korea has been illegal for decades, but a special law was introduced in 2004 to crack down on red-light districts.

It can punish buyers of sex and some sellers - such as pimps - with up to one year in prison or a 3 million won fine. Since then, a number of traditional brothels have closed, and sex workers occasionally come out to protest the law.

The Ministry of Gender Equality and Family welcomed the ruling Thursday, saying humans cannot be sold. It said it would help women who had no other way to earn a living except through prostitution.

Since the Special Law on Prostitution was implemented in September 2004, up to 20,000 people have been booked on charges of prostitution every year.

It exempts women who are forced to sell sex from punishment, but punishes pimps and clients.

Seven cases were filed in the Constitutional Court by pimps between 2004 and 2012.

The court dismissed the petitions or upheld the law in all seven cases.

Business in Miari Texas, a once-active red-light district in Seongbuk District, northern Seoul, has noticeably dwindled in the past 10 years since the implementation of the anti-prostitution law.

In the brothel area in Paju, Gyeonggi, the number of sex parlors decreased to 20 from about 200 a decade ago.

But other forms of prostitution have greatly expanded, including massage parlors, room salons, assignations in so-called officetels and online prostitution.