Students make U-turn in order to get ahead

Students make U-turn in order to get ahead 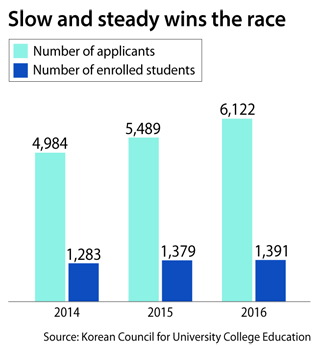 After graduating from a four-year university in Korea, some might consider enrollment at a technical college a bit of a U-turn, but for certain graduates technical colleges are fast becoming a shortcut to better job prospects and handy first-hand experience in their chosen fields.

The Korean Council for University College Education (KCCE) announced Wednesday that 6,122 graduates of four-year universities applied to technical colleges this year and 1,391 of them successfully enrolled.

But the overall trend of four-year university graduates enrolling at technical colleges shows marginal, if not negligible, growth; in 2015, 96 more students enrolled at technical schools than the year before, and this year, 12 more enrolled than did in 2015.

Nevertheless, those who do invest the time and money find the experience well worth it, as it can help them gain invaluable training.

“I enrolled into the physical therapy department of the Daegu Health College because it provides on-site training for the field,” said Park Min-hyuk, who graduated from Korea University with a master’s degree in sports medicine. “I know a lot of the theory in sports medicine but lack the practical experience.”

Others chose to attend technical colleges to carve out a second career path. Oh Seong-sik, a 62-year-old retiree of Gongju City Hall, enrolled in the department of social welfare at Korea University of Media Arts.

“People live to be 100 years old these days, so what’s not to try if you’re alive long enough to do it?” Oh said. “I’ve always wanted to do something meaningful. After I graduate with a degree in social welfare, I want to run a nursing home.”

A freshman this year, Oh is also volunteering at a rehab center for older adults. Many so-called U-turners share Oh’s desire to do something meaningful. Among those who enrolled at technical colleges this year, 39 percent entered nursing programs and 13 percent entered health programs.

“Job prospects in nursing and health sectors are quite high, given their specialized skills and knowledge,” said Lee Myeong-joo, director of undergraduate admissions at the KCCE.

“In the age of new media, more students are choosing to study music and performance arts,” said a KCCE official.

In responding to new industry demands, technical colleges are also producing unique programs. The Health Institute of Technology at Daejeon, for instance, has established a department of disaster and safety architecture, while Osan University now has shoe design department, the only one of its kind in the country.