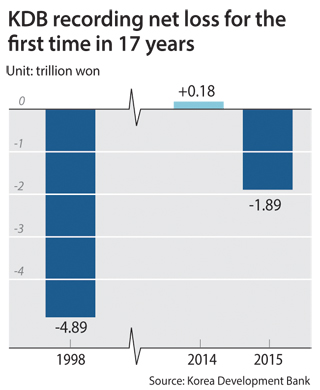 The state-run Korea Development Bank (KDB) reported on Friday that its 2015 earnings shrank to the largest level since the Asian financial crisis hit the nation in 1998.

The main culprit of the sluggish performance was the massive funding that KDB gave to highly debt-ridden companies such as Daewoo Shipbuilding & Marine Engineering and Hyundai Merchant Marine, whose debts became insolvent.

“Our major borrowers, mostly shipbuilders and shippers, last year recorded net loss after saving cash in reserves as an allowance for bad debts, to prepare for possible cases where the borrowers can’t pay back the debt,” a KDB representative said. “We also had to carry out a debt-equity swap for our borrowers to help restructuring.”