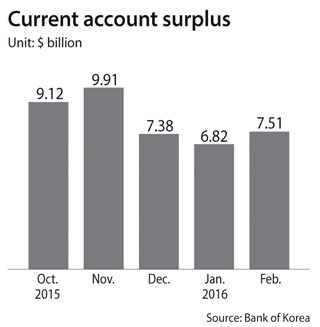 However, as it has been in recent years, the surplus was the result of faster shrinking imports rather than an increase in exports. Exports fell again compared to the previous year.

The exodus by foreign investors also continued for the ninth consecutive month, as uncertainties in the international financial market hung over the Korean market.

According to the Bank of Korea on Friday, the current account surplus for February was $7.51 billion. That’s a 10 percent increase from January’s $6.82 billion and a 23.5 percent surge compared to the same month a year ago.

“The current account surplus grew larger as trade conditions improved thanks to low crude prices in the international market,” a BOK official said.

As a result, imports saw a sharper drop than exports as they shrank 13.9 percent to $28.7 billion, while exports retreated 9.3 percent to $36.6 billion, resulting in a $7.9 billion surplus, which is the same as January.

Foreigners selling off their stocks in the Korean market, however, have actually reduced from $4.53 billion in January. Although uncertainties from the global market still remain, several favorable changes, including the U.S. Fed possibly holding back on raising interest rates, is speculated to have helped the market to relatively stabilize.