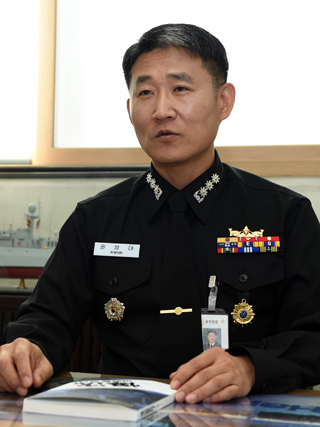 The former commander of an underwater team investigating the sinking of the Cheonan warship in 2010 clearly recalls the day they found a torpedo propeller on the floor of the sea - the smoking gun that proved North Korea was behind the attack.

“When we raised the crucial evidence - which was a much bigger piece of evidence than we expected - surprisingly, my mind was very calm,” writes Capt. Kwon Young-dae, 51, in a new book, “Searching for the Torpedo.”

The book describes the 56-day underwater search for evidence of how the Cheonan was split in half and the raising of the Cheonan from the depths. It is written in diary format.

Kwon was commander of the Strategy Battalion Commander of Underwater Demolition Team (UDT) 1.

According to Kwon, after the sinking of the warship, the situation was so hectic that he didn’t even have time to call his house. This explains the subtitle of the book: “The 56-Day Struggle of the UDT On-Scene Commander During the Cheonan Warship Search Operation.”

“I wanted to provide evidence to persuade people who still believed that North Korea didn’t play any role in the sinking of the Cheonan warship,” Kwon said when asked why he published the book. North Korea continues to deny sinking the warship, and some leftists in South Korea also say they don’t believe it.

Kwon said he clearly remembers May 15, 2010, 50 days after the warship sank. Two fishing boats, Daepyung 11 and 12, were sweeping the sea floor where the warship was attacked. They found the propeller of the North Korean CHT-02D torpedo.

Kwon’s hometown is Jinhae, South Gyeongsang, where the Naval Academy is located. Despite the fact that his father was a noncommissioned officer of the Army, Kwon joined the Navy.

Kwon is now a battle squadron commander in the Incheon Naval Sector Defense Command. He’s still contemptuous of lies and conspiracy theories spread about the sinking of the Cheonan.

“There were conscripted soldiers helping in the search operations,” Kwon said. “If we tried to conceal something, they would have disclosed it after they were discharged from service.”