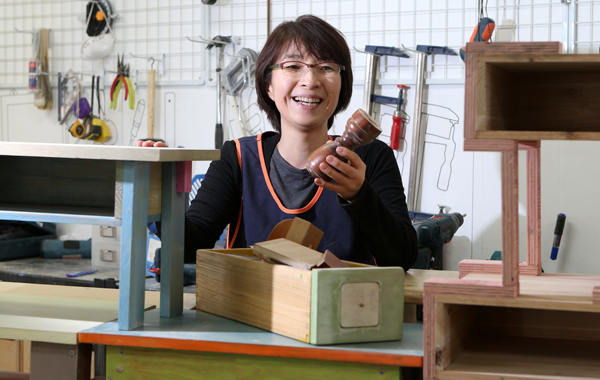 “I try to give life to the stories that are hidden in each furniture,” said Jung Seon-ju, an artist who revives thrown-away lumber into newly built furniture. [SHIN IN-SEOP]

At the rooftop of the Seongbuk Young Art Space in northern Seoul, something peculiar is going on. There are tables and chairs with legs missing, washboards and cutting boards refashioned as pastel storage shelves, objects of all sorts tempered into something new.

In a workshop located at the top of the art Space, Jung Seon-ju, 46, has been crafting furniture from waste wood for the past six years.

“Although they’re old bits of wood whose colors have all faded, if you touch them up here and there, they become brilliant,” Jung said. “They aren’t reformed; they’re reborn.”

Jung came up with the idea of recycling lumber to build furniture in 2010, when she started searching for junk furniture in nearby alleys to save on supply costs. Much of what she found was made of wood, she recalls.

“I thought to myself, new wood is expensive, but there are so many good pieces just out in the streets.”

Upon visiting a recycling depository to find more furniture, she was shocked. The furniture there was thrown out of trucks onto the floor, and after being stored in containers, it was all shipped to an incineration plant near Incheon Port.

“I thought it was such a huge waste since people were paying money to throw away furniture, and the incineration process is actually quite costly,” Jung said.

Afterwards, Jung said she made up her mind to transform abandoned furniture into something valuable. With some of her colleagues, she began building new pieces harvested from used furniture.

After seeing Jung collect several items, local residents started bringing their old and broken furnishings to her. Jung then decided to turn her undertaking into a community project, allowing residents join her in the re-making process.

It was a huge success. As word spread about the project, its participants expanded from a few housewives to young students and family visitors.

“Some of the little children who first came to the workshop holding their mother’s hands are now university students who come in order to mentor elementary students,” Jung said.

The completed pieces are sent to underprivileged children living without furniture. According to the Seongbuk District Office, there are roughly 3,000 such children in the area, living with their clothes and blankets stacked in piles rather than storing them in furniture.

“We all know the importance of a bed and table for a child,” the artist said. “This is why I’m donating furniture especially to children among neighbors in need of help.”

Jung is continuously expanding the project; she has two carpentry studios open as of now and is planning to open three more this year.

“Artists have to fulfill their social duties,” Jung said. “Interacting with society has become the motivation behind my work.”