China reasserts its opposition to Thaad

China reasserts its opposition to Thaad 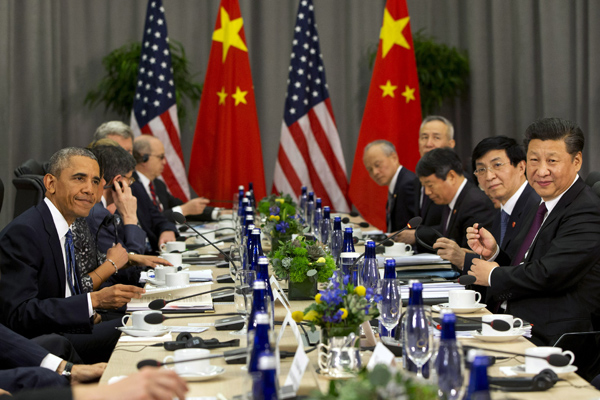 Ahead of the 2016 Nuclear Security Summit, a series of bilateral summits took place among the participating leaders on Thursday. Among those talks were a meeting between Xi and Obama and another between Xi and Park.

While the Chinese leader promised to cooperate with Washington and Seoul to end Pyongyang’s nuclear arms program, he made clear his protest against the U.S. military’s plan to deploy a Terminal High Altitude Area Defense (Thaad) system in South Korea. Following North Korea’s fourth nuclear test in January and a long-range missile firing in February, Seoul and Washington began talks on deploying the antimissile battery in the South.

The Thaad system is an easily transportable defensive weapon system designed to protect against hostile incoming threats such as tactical and ballistic missiles at ranges of 200 kilometers (124 miles) and altitudes of up to 150 kilometers.

The placement of the system in Korea has been controversial because it comes with a powerful radar system that can cover more than 1,000 kilometers. While Seoul and Washington stressed that the deployment is intended to defend South Korea and the U.S. Forces Korea, China and Russia have countered that the radar can be used as a means of surveillance against them.

In a briefing regarding the Xi-Obama summit, Chinese Vice Foreign Minister Zheng Zeguang said President Xi made clear his opposition to the plan, telling Obama that China was “firmly opposed” to it.

“Such deployment will undermine China’s security interests,” he said, “and will affect this region’s strategic balance.”

“The two leaders exchanged their fundamental stances on Thaad deployment,” said Kim Kyou-hyun, senior presidential secretary for foreign affairs and national security. “They agreed that the two countries will continue talks on this matter.”

As Beijing remained hesitant to punish Pyongyang for its latest nuclear test, Park issued a strong message to China in January, conveying during a live media conference that Seoul is considering Thaad deployment. Since then, China has participated in and approved a UN Security Council resolution to impose sanctions on the North, but continued to voice concerns about Thaad deployment.

“China has maintained its support for denuclearizing the Korean Peninsula, maintaining peace and stability and resolving issues through dialogues and negotiations,” the Chinese Foreign Ministry said.

“China urges all concerned parties to fully and strictly implement the sanctions, and refrain from any words and actions that could exacerbate tensions and any moves that may harm the security interests of other countries or regional stability,” Xi was quoted as saying.

Although the statement did not specifically mention Thaad, Beijing has used the phrase “moves that may harm the security interests of other countries or regional stability” to refer to Thaad deployment.

Earlier this week, Washington said it hopes to discuss the issue with Beijing. Rose Gottemoeller, the under secretary of state for arms control and international security, said Tuesday that Seoul and Washington have begun talks, but no decision has yet been made concerning deployment.

She also said the system is intended to deter the North’s threats, not to spy on China.