Zaha Hadid, the architect behind DDP, dies at age 65

Zaha Hadid, the architect behind DDP, dies at age 65 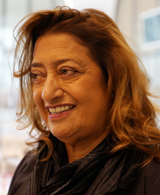 Iraqi-British architect Zaha Hadid, whose modernist, futuristic designs included the swooping aquatic center for the 2012 London Olympics and more recently the Dongdaemun Design Plaza in central Seoul, has died at age 65. She leaves a string of bold, often beautiful and sometimes controversial buildings around the world.

Hadid’s firm said she died Thursday in a Miami hospital.

She had contracted bronchitis earlier this week and had a heart attack while being treated.

“She had contracted bronchitis earlier this week and suffered a sudden heart attack while being treated in hospital.”

Upon her sudden death, the Seoul Design Foundation, which operates the Dongdaemun Design Plaza she had designed in 2014, expressed great condolences to her death.

In London, where she lived and worked, Mayor Boris Johnson tweeted that “she was an inspiration and her legacy lives on in wonderful buildings” at the Olympic park and around the world.

Born and raised in Baghdad, Hadid studied mathematics at the American University of Beirut before enrolling at the Architectural Association in London in 1972.

She worked for the groundbreaking Dutch architect Rem Koolhaas before setting up the London-based Zaha Hadid Architects in 1979.

Hadid’s work fused her knowledge of mathematics and embrace of computer technology with soaring imagination and ambition.

She designed buildings around the world - though relatively few, she often noted, were in Britain. Her projects included an innovative BMW plant in Leipzig, Germany; sleek funicular railway stations in Innsbruck, Austria; the glittering Guangzhou Opera House in China; Rome’s light-filled MAXXI museum for contemporary arts and architecture; and the strikingly curved Heydar Aliyev Center in Baku, Azerbaijan.

Her buildings were always talking points, and sometimes controversial. The Dongdaemun Design Plaza in Seoul was compared by detractors to an ugly spaceship that had made an emergency landing. Last year, the Japanese government revoked her commission to build the stadium for the 2020 Tokyo Olympics amid spiraling costs.

Uncompleted works include one of the stadiums for the 2022 World Cup in Qatar and a new Iraqi parliament building in Baghdad.

Hadid twice won Britain’s Stirling Prize for architecture and in 2004 became the first woman to win the Pritzker Prize, known as the “Nobel prize of architecture.”