Another season of Major League Baseball officially starts today, and Koreans are more excited than ever thanks to the eight South Korean players that will appear in the big league this year.

Ryu joined the Dodgers in 2013 with a $36 million deal for six years. Becoming the first baseball player to join the MLB straight out of the KBO through the posting system, which the Korean and U.S. leagues adopted to protect high-profile Korean players, Ryu made his big league debut against the San Francisco Giants in April 2013.

The pitcher has since grabbed 28 wins with a 3.17 earned run average (ERA) and 293 strikeouts. Ryu became an invaluable asset for the Dodgers, but despite expectations that he would see his 200th inning in 2015, his season came to an abrupt end last May when he suddenly needed surgery to repair his left shoulder. Ryu has been rehabilitating his arm for almost a year and recently began throwing live sessions.

“I think he needs not to rush it,” said Lee Sang-hoon, the director of CM hospital and a designated medical expert for KIA Tigers and NC Dinos, about Ryu’s condition. “Ryu is handling the rehab process well. We should be able to see him throw in a game by June.”

The Rangers’ expectation for slugger Choo in the new season is undoubtedly high. As one of the highest-paid batters in the Rangers’ batting line-up, Choo secured a $130 million deal for seven years in 2014. But his first season for the Rangers did not go so well, as he struggled with an ankle injury and played in only 123 games. In his second season, he collected 22 home runs, a batting average (BA) of .276 and 82 runs batted in (RBI). Although he had a slow start, he played well towards the end of the season.

One local newspaper speculated that if he kept up his same level of performance at the end of last season, the Rangers’ investment will really start paying off.

“His performance last season was a little bit alarming but he’s put out solid performance so far in the spring,” said Jon Daniels, the general manager of the Rangers.

Rangers’ manager Jeff Banister also has high hopes for Choo. “He is a dependable leader who sets a good example for the younger players,” said Banister. “What’s remarkable about him is that he’s got a strong will and focus that compels him to not give in even when things are going rough.”

After playing for Japan’s Hanshin Tigers from 2014 to 2015, closing pitcher Oh signed two year contract with a team option with the Cardinals that could potentially be worth $11 million. Oh led his team to the Japan Series in 2014 during his first year in the league and became the Climax Series MVP. Oh was also named the league All-Star in 2015 and saves leader in both 2014 and 2015. His record with the Tigers stands at an ERA of 2.25 and 80 saves. The Cardinals are happy with the Korean pitcher, who has collected a 1.86 ERA and four strikeouts during the spring camp. Oh’s presence on the Cardinals will bolster the team’s relief pitching lineup. Oh is likely to become a set-up man, the pitcher who plays in the game right before the closer, for the Cardinals this season.

His teammates are also impressed.According to Cardinals shortstop Greg Garcia, Oh’s balls are very unpredictable and his unique pitching form is effective in throwing batters off balance.

It seems like the Twins have hit the jackpot after bringing Park, one of the KBO’s most celebrated sluggers, onto their roster this year. The two-time Korean league MVP award winner signed a $12 million contract with the Twins and has accumulated a BA of .259, hitting 15 balls in 58 at-bats in the exhibition games. He has also had three home runs and 13 RBIs during the spring league, ranking second in the Twins’ home run and RBI leaderboards so far, leading sources like MLB.com to speculate that he could become the central batter for the Twins. Paul Molitor, the manager of the Twins, has been rotating Park in the batting lineup throughout the spring league in order to gear him up for the season. “His batting speed and response on the plate is quick and efficient,” said Molitor. “His performance on first base is also outstanding.” Park is likely to play in the opening match for the Twins as the designated hitter.

Lee’s position for the Mariners was not initially guaranteed as he joined the club with a minors contract. But he was given an opportunity to play in the spring camp when the team invited him to spring training.

Since then, Lee’s performances on the plate as well as on first base have proven that Lee could become a valuable addition for the team.

Finally, on March 28, the Mariners decided to keep Lee in the big league and included him in the team’s roster for the opening game.

Moving up from his minor’s contract, Lee can earn up to $4 million including incentives for a year. That will look like a good deal if he maintains his record during the spring camp. Lee recorded a .264 BA for 24 games, going 14-for-53 with one home run and seven RBIs.

“He’s got the power,” said Scott Servais, manager of the Mariners, about Lee. “He’s adjusting very well and he shows something new almost everyday.”

“He has a history of hitting left-handers and I think he has given us reason to believe in spring training,” Mariners general manager Jerry Dipoto said to the Seattle Times when he announced Lee’s spot on the roster. “He’s very prepared, very calm in the batter’s box.”

Kang’s first season in the MLB was momentous both on the plate and also out in the field as the team’s shortstop. The four time KBO Golden Glove Award winner joined the Pirates after signing a four-year, $11 million contract with the option of a fifth year. Becoming the National League Rookie of the Month in July 2015, Kang showed decent performances for the Pirates during the season, recording a .287 BA, 121 hits, 15 home runs and 58 RBIs. However, his decorated first season came to a halt when he was unexpectedly injured in September 2015 after tearing his MCL.

Kang was covering second base in a double play attempt against the Chicago Clubs. To break the attempt, Chris Coghlan of the Cubs slid into the second base and crashed into Kang’s left knee. Since Kang’s injury, the MLB has implemented new rule this year stating that a player cannot slide into the base in order to break off a play but only can do so to reach bases. Although Kang is still on the Pirates’ disabled list, he’s been recovering by playing in the minors during the spring to test out his knee. Kang is expected to return in late April or early May.

Choi is guaranteed a spot on the roster for the opening game, and may play as a left fielder, according to local Los Angeles media.

It has been a long journey to get this far. Choi went straight to the Major League out of high school in 2010 and had been wandering around the minors for the past six years until the Angels gave an opportunity prior to this season to play in the spring league.

He has also had his share of injuries. For instance, he fractured his fibula last year during the spring league when he played for the Mariners.

Finally, Lee signed a $1.05 million deal for one year with the Angels in the Rule 5 draft at the end of the last year. In the Cactus League this year, Lee went 14-for-66, averaging a BA of .212, hitting one homer and 9 RBIs for the Angels.

“He is very optimistic and has the ability to hit the ball hard,” said Angels manager Mike Scioscia about Choi. “He is one of the most noteworthy players among the back-ups.” 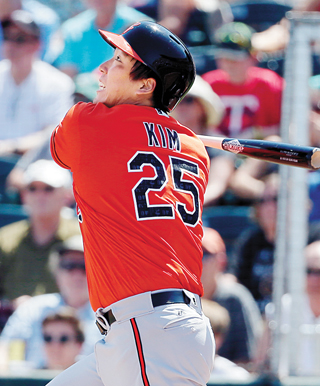 Kim Hyun-soo of Baltimore Orioles has been struggling in the spring league, and might not see any playing time in the opening-day match. [AP/NEWSIS]

Kim inked a two-year deal worth $7 million with the Orioles after winning the Korean Series last year with Doosan Bears. Although Kim was highly valued going into the spring camp, his position in the team is precarious at the moment following a preseason in which his BA was a meager .178 with only eight hits during 45 at-bats in 17 games. After the poor performance in the Grapefruit League, Orioles general manager Dan Duquette and manager Buck Showalter have been trying to relegate Kim to the minors. “I can tell Kim is agitated and rushing things on the plate,” said Lee Jong-beom, baseball commentator at MBC Sports Plus. “What he needs to do right now is escape from the pressure.” Kim had the right to refuse the demotion according to his contract with the Orioles and he has decided to stay on the team.