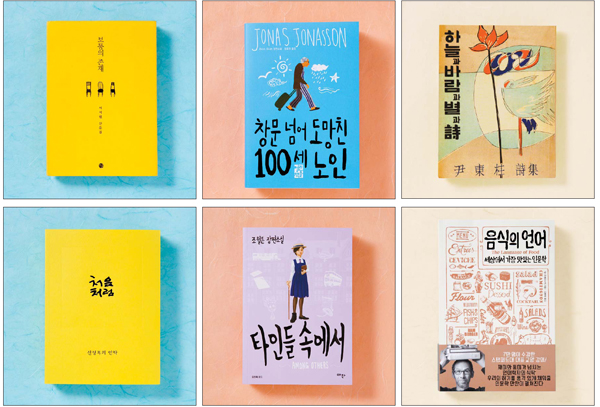 Books change their clothes these days to attract more readers - they have become more colorful, unique and eye-catching. There are mainly three features to this trend: the color yellow, humorous illustrations and retro style. Each set of the trend draws attention as they act to emphasize what’s within the books. [JEON HO-SUNG]

“Don’t judge a book by its cover.”

This is a common saying, but the latest trend in the publishing world these days involves approaching potential readers with novel cover designs.

The trend comes as most bookstores are changing their strategies, transforming from a place where people purchase books to somewhere to sit and read books. In line with the change, a lot of bookstores have added tables and sofas to create an atmosphere in which people feel comfortable.

As people spend a long time in front of the bookshelves, the publishing industry is seeking new ways to grab the attention of consumers with new book cover designs. The books that are wearing the new, colorful clothes seem to say to people, “Come read me!” There are several features of this trend.

First, an eye-catching feature of about 20 of today’s best-selling books is the color yellow. A color of the youth and vibrancy, the yellow on the covers make the books more interesting.

For example, “Existence of Ordinary” by Lee Souk-won and “For the First Time” by Shin Young-bok rank high on the best-seller list - in ninth and 19th place, respectively - according to Kyobo Book Centre, one of Korea’s largest bookstores.

They were first published more than 10 years ago, yet they have successfully risen in the ranks again, and the renewed success can be attributed for the vibrant color.

Lee Hee-sook, the editor of Dal Publishers, said, “Essay books are nice presents, so we decided to design a special edition of the book ‘Normal Existences.’”

“Actually, we thought of the color yellow as representing the book, because the yellow cover stood out from all the other books,” she continued.

Also, Lee Gyung-ah from Dolbegae, a the publisher of “For the First Time,” said, “The book recalls a little bird flying for the first time, so we thought of forsythia flowers or a chick.”

“The design is simple, because we wanted to emphasize the book itself,” she added.

In addition, cover designs with humorous illustrations and handwritten titles are a common sight these days.

The trend emerged with Swedish author Jonas Jonasson’s hit novel, “The Hundred-Year-Old Man Who Climbed Out the Window and Disappeared.” Another novel with a similar cover design, “A Man Called Ove” by Swedish author Fredrik Backman, solidified the trend.

Since then, this type of cover design has come to represent Northern European literature. “The Little Old Lady Who Broke All the Rules,” by a Swedish novelist Catharina Ingelman-Sundberg, featured a similar cover design.

“I pondered whether I should put more emphasis on the character or the title,” said Suk Yoony, who designed the cover for Jonasson’s book for publisher Open Books. “I looked through the book designs from abroad and figured out that they used unique and humorous designs.”

She therefore decided to include an illustration of an elderly man in his pajamas. However, the title was too long, distracting attention. “Therefore, I thought of a handwritten title. This way, I could emphasize both the illustration and the title,” she explained.

Now, not only Northern European literature features such whimsical designs. Publishing company Arzak Livres, which specializes in science fiction, decided to use similar designs to appeal to readers.

According to Lee Shin-woo, who does marketing for the company, most science fiction books had similar designs, such as including dragons or spaceships on the cover. Also, the dystopian science fiction covers are not likely to attract readers because of their dark tone. “However, we wanted the readers to be able to approach the books more easily with the design,” Lee said. “Joe Walton, who wrote the book ‘Among Others,’ said that he liked the Korean version of the cover the most among 16 countries.”

Finally, the retro style has become popular in the publishing industry. Sowadari, a small publishing company, started publishing poems by historical Korean poets, such as a revised edition of “Sky, Wind and Stars,” a poetry collection by Yoon Dong-ju originally published in 1955, as well as collections by poets Kim So-wol and Baek Seok.

The company is a one-person operation - Kim Dong-geun, the CEO, designs and edits the books himself. “I thought that people are willing to possess the reissued publication of the poems, just as most people want first editions” he said. “The poet Yoon Dong-ju also wanted to get the first edition of the collection of Baek Seok.”

The retro style isn’t found only on poetry collections. Informative books also make use of the design styles of the past. “The Language of Food: a Linguist Reads the Menu” and “Adventures in Stationary: a Journey Through Your Pencil Case” are some examples.

Oh Pil-min, who designed the covers for the two books, said he got the idea from the printed menus of European restaurants in the early 1990s. “The vintage designs seem to have been revived these days,” he said.

These three trends may make books more attractive, but there are concerns that more and more publishing companies are reusing designs developed by other publishers.