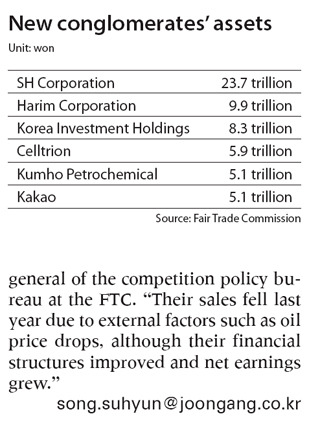 Kakao Corp., Harim Corporation, Celltrion, SH Corporation, Korea Investment Holdings and Kumho Petrochemical have been categorized by the Fair Trade Commission as conglomerates and banned from having cross-shareholdings among their subsidiaries.

According to the FTC on Sunday, the assets of each of the six business groups surpassed the 5 trillion won ($4.3 billion) mark as of early this year because of major changes in their corporate governance structures, particularly mergers and acquisitions.

The antitrust agency renews the list of companies banned from having cross-investments among affiliates every April. The FTC tries to root out unfair transactions among subsidiaries within a large corporate group that increase the personal wealth of group owners.

A total of 65 companies are on the list this year, four more than last year. Two - Homeplus and Daesung - got dropped from the list. Once making it onto the list, companies should report major internal transactions to the authority.

Kakao’s total assets rose to 5.1 trillion won after it acquired Roen Entertainment, the operator of a music streaming and download service provider, Melon, for 1.87 trillion won in January, according to the agency.

Celltrion, a bio-pharmaceutical firm and the top Kosdaq-listed company, saw its total assets balloon to 5.9 trillion won as its stock price surged.

Harim, the country’s largest poultry-processing firm, has a total of 9.9 trillion won in assets after it took over Pan Ocean, a shipping company that was part of the bankrupt STX Group, last year. Harim has become the 38th largest company in the nation.

SH Corporation, a public rental housing provider, made it onto the list after it set up a subsidiary. Kumho Petrochemical was included after it was spun-off from Kumho Asiana Group.

There are minor changes in the top 10 list of conglomerates, the FTC said. Hyundai Motor Group snatched the second largest position with 209.7 trillion won in assets by beating Korea Electric Power Corporation, which is now third, with 208.3 trillion won. Samsung Group remains No.1 with 348.2 trillion won. Hyundai Heavy Industries slid to 12th this year from 10th due to the slump in the global shipbuilding market. Korea Expressway Corporation filled the shipbuilder’s previous position.

“Sales of the groups on the list have been continuing to decline since 2013,” said Kwak Se-bung, director general of the competition policy bureau at the FTC. “Their sales fell last year due to external factors such as oil price drops, although their financial structures improved and net earnings grew.”