KT targets those in early 20s with mobile plan

KT targets those in early 20s with mobile plan 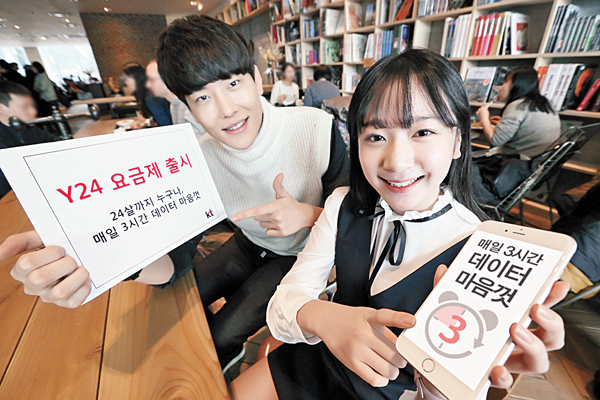 In March, telecommunications provider KT launched the “Y24 Mobile Plan,” a service with the same prices and features as its existing “LTE Data Selection Plan” but with additional benefits: three hours of unlimited data a day, half-price content and the opportunity to participate in a free movie event.

The plan is only available to users aged 24 or younger.

The plan’s three-hour unlimited data service, its most-promoted feature, provides customers with 2 gigabytes of data for three hours at the time of their choice, enough to stream a high-definition movie for two to three hours. Afterwards, customers get unlimited data at 3 megabits per second, which KT believes will allow users in their teens and 20s to freely enjoy content such as games, videos and music.

Y24 Mobile Plan users are also eligible to receive a monthly discount of 50 percent for services including “Olleh TV Mobile Daily Pack” and “Genie Pack,” which provide deals on data for video and music streaming. KT expects the discount will be useful to people in their early 20s, who are most likely to be looking for the content.

On top of those benefits, the Y24 Mobile Plan also gives users the opportunity to watch the latest movies for free through its “Y24 Movie Night” event. On the last Friday of every month, one entrant is selected to watch a movie at a CGV theater with a companion of their choice. Having announced its first winner on March 25, Y24 Movie Night will be held until the end of this year.

The initial target market for the Y24 Mobile Plan was students 18 years old or younger, but this changed last November when KT held interviews to find out how users felt about existing under-19 mobile plans.

KT ended up interviewing customers in their early 20s, the majority of whom gave the plans unfavorable reviews. They revealed that students consider data the most important part of a plan, but that they typically needed more data than current ones provide.

Based on these results, the KT marketing department modified the Y24 Mobile Plan, changing its target age range and adding benefits customized to meet the needs of 20-somethings. The process involved data analysis and 10 staff debate forums.