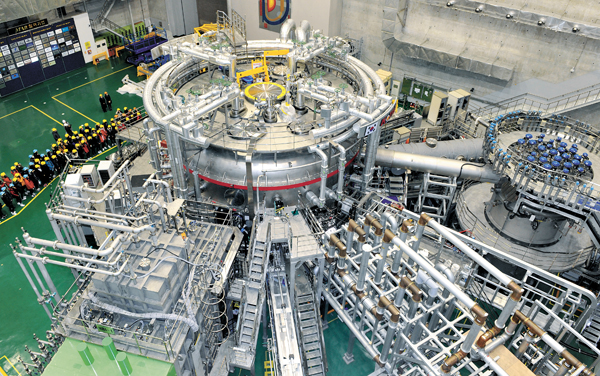 Students take a tour of the nuclear fusion reactor called “Kstar” located in Daejeon. While the reactor is one of the best in the world, experts are worried Korea’s nuclear fusion project is suffering from a lack of funding. [KIM SUNG-TAE]

Researchers at the National Fusion Research Institute (NFRI) are working on a world-class “Kstar” nuclear fusion reactor that will supply “dream energy” without threatening the environment.

“We set a goal to make energy generated by 300 liters [80 gallons] of coal by just using a liter of seawater in 30 years,” said Oh Young-gook, a deputy chief at Kstar.

Kstar is one of the world’s greatest nuclear fusion reactors and is often dubbed “Korea’s artificial sun.” When it is fully developed, it will be able to make a huge amount of energy, like the sun, through nuclear reaction.

Researchers are working on the superconducting tokamak, the NFRI’s facility in Daejeon. It was developed and constructed solely by local technology. Despite the progress, experts are concerned that Korea will fall behind other countries because of a lack of funding.

Nuclear fusion energy is generated when light elements such as hydrogen nuclei make fusion to form helium. Two or more atomic nuclei collide at a very high speed and, during the process, these nuclei are converted to photons, or energy, as they try to repel each other.

Deuterium, or heavy hydrogen, is the only raw material needed to generate energy, and there are unlimited amounts under the sea.

Nuclear fusion energy does not release any nuclear waste, unlike a nuclear power generation. 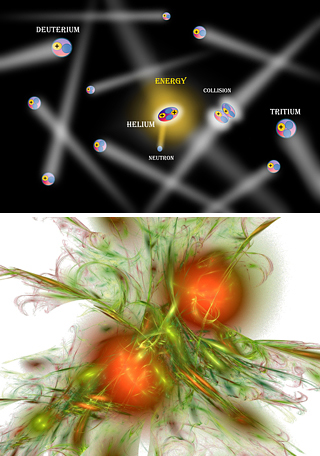 Energy is generated when light elements such as hydrogen nuclei make fusion.

Due to these unique characteristics, nuclear fusion is often called the “dream energy” that will produce large amounts of energy without affecting global warming or causing environmental damage.

The United States and European countries have been researching the technology since the 1950s. Korea spent 300 billion won ($260 million) in 1995 to create Kstar, and the institute finally began its operations in 2007. Korea was a latecomer to the industry, but its technology has now caught up with other developed countries.

Korea now works with the United States, the European Union, Russia, Japan and China on the International Thermonuclear Experimental Reactor (ITER), an experimental fusion reactor being built in France. The countries involved will spend some 17.2 trillion won to run the project until 2042. Korea is responsible for 9 percent of the total research funds.

Lee Gyung-su, who ran Kstar in the past, was appointed deputy director general at ITER, and many other Korean researchers are currently participating in the project. Local manufacturers that did businesses with Kstar are also supplying products such as superconducting wire to ITER.

Although many countries are collaborating in developing the experimental reactor, they compete fiercely to get the source technology first.

The European Union has been leading this new industry and is spending tremendous amounts of money, since they believe that the energy will become one of the most important technologies in the future.

China announced the plan to commercialize the new energy 10 years before other developed countries and is building its own experimental fusion reactor as big as ITER. In addition, 13 Chinese universities and 14 related institutions are researching together on the project.

“China’s nuclear fusion technology will grow faster than Korea’s since the Chinese government is actively involved in it,” said Kim Kee-man, a director general of NFRI.

Japan is also making considerable progress in the industry. The National Institute for Fusion Science (NIFS) and a total of 165 institutions and universities, including Kyoto University, are currently running a joint research project. They have already spent some 132.7 billion won for the fundamental research sector.

Korea is falling behind in research funding. The country invested some 40 billion won in Kstar last year, but other research funds were only about 6.6 billion won. Research institutions such as Seoul National University and the Korea Advanced Institute of Science & Technology are given about 1 billion won each from the fund.

“Korea developed an amazing reactor like Kstar but is not spending much money to follow up or in research and development,” said Hwang Yong-seok, a professor at Seoul National University’s nuclear engineering department.

“Other countries will take away Korea’s key technologies if the government does not give long term and well planned support.”

Another problem Korea is facing is the lack of researchers. It is essential for the country to secure a large number of experts since this new energy sector deals with various kinds of science. The European Union spent some 11.7 billion won a year to educate and train more than 600 graduate students.

In Korea, there are only about 50 people who received masters and doctorate degrees a year. Even though students learn the topic in school, there are not many places that hire them. NFRI recruited only four people last year.

“We need to work hard to find alternatives for energy, such as nuclear fusion, since coal fuel will run out eventually,” said Moon Seung-il, a professor at Seoul National University. “Korea needs to make a long-term plan like China and Japan.”