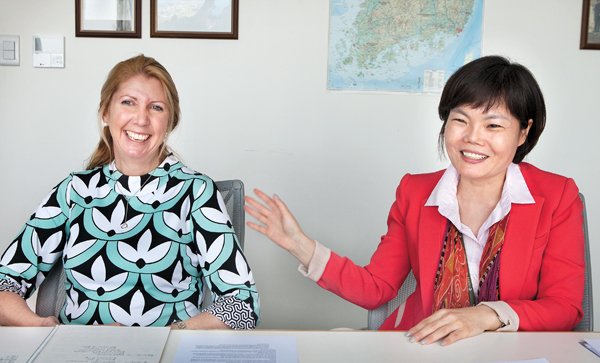 Only 6.9 percent of executives in Korea’s top 10 pharmaceutical companies are female, a figure that reinforces the local drug industry’s image as a male-dominated club.

Voices insisting more female workers should be hired are increasing, following a series of reports that concluded companies with a balanced gender ratio perform better than firms with a disproportionate ratio.

The low ratio was disclosed by the Financial Supervisory Service.

In terms of female leadership, French multinational pharmaceutical company Sanofi Aventis has set a good example for local companies, as women make up over 40 percent of staff in the firm’s Asia-Pacific region and Korean office.

Kay Kyungeun Bae, Korea country chair of Sanofi Aventis, and Leah Goodman, regional head of DCV in the Japan and Pacific region, symbolize the rising status of women within the company.

The multinational drug maker pools resources at cultural and policy levels to ensure that women can also thrive in their work environment.

Bae, who took over the Korean office as the first female head in the country in 2013, now jokingly said that male workers talk of reverse discrimination due to the growing proportion of women.

The Korea JoongAng Daily sat down with the two executives on March 22 to discuss Sanofi’s direction in empowering female workers along with a program aimed at boosting the confidence and efficiency of women workers.

“In the Asia-Pacific, there are so many reasons why women can’t or won’t develop their output,” Goodman said. “One of them is the societal pressures, especially in countries like Japan.

“That is related to the preconceptions of the older generation about what women can and can’t do. Our responsibilities include creating an environment where women can succeed,” added Goodman, who visited Seoul for the support initiative called the “Catalyst Program” that ran from March 22 to 24.

The program was open to female workers of different career levels and regions, including Hong Kong, Taiwan, Australia, India and Philippines, though the majority came from China, Korea and Japan.

About 60 workers are invited to the sessions which are held three times a year.

Goodman said the three-day program consists of various sessions, including role modeling and group mentoring. “The program is designed to listen to women in the Asia-Pacific. So how do you help women understand or deal with work-life balance and help them to be enabled with knowledge to make choices about their career,” Goodman said.

In the role-modeling session, participants watch videos of other successful women throughout the world.

Bae said that the benefit of the program is reflected in the numbers, as 24 percent of participants succeed in being promoted after taking part in the sessions.

Putting aside the numbers, the two have witnessed personal changes in participants as they serve as mentors in the program.

“I remember a medical director in Malaysia. She attended the program held in Shanghai,” Goodman said.

“She had previously not seen herself as someone who could take on regional roles and was reluctant to relocate herself. But after the program, she became more confident and is now in discussions with the company for a senior role outside of Malaysia.”

Another important pillar of the program is the group networking of diverse women who are at a similar level. The small group interaction is designed to create a network to have conversations about various challenges.

Bae said there are other frameworks inside Sanofi to promote gender balance and broader issues concerning diversity.

“We have a regional women leadership council and country-level leadership council. This is because each country has different issues and cultures,” she said. “So the council members meet on a regular basis to discuss what should be done to improve diversity in the company.”

Such efforts have translated into a growing proportion of female managers and women workers in general.

In the Asia-Pacific region, 48 percent of Sanofi workers are women, while female workers account for 42 percent above managerial levels.

The Korean office has a similar picture with 46 percent women workers. Above the managerial level, women account for 45 percent.

She noted, however, that the issues addressed in the program and the council are not solely about empowering women.

“We want to go beyond gender diversity, as we look at generational diversity, broad parental issues and how we manage different conflicting views. So we are turning our attention toward more comprehensive themes,” she said.

Still, Goodman acknowledged that a lot of help is needed for female workers to advance in Asia, since cultural factors will likely drag down their motivation to move up the corporate ladder.

To better support women workers, she stressed that a company should have strong recognition that the company would do a better job if it has a more diverse view of planning, investment and other areas of business.

In line with the view, Bae said that it is important for a company to judge performance based on the output, not the hours people put in. “Traditionally in Asia, it’s important to stay in the office for a long time to be seen as a competent worker. This pressure can make married women stay away from returning to work after having babies.”

The Korean head introduced a number of measures to make a woman-friendly environment. Among them is a policy called “Family Day,” in which workers are allowed to leave at 5 p.m. every Friday to spend time with their family.

Other examples include flexible work hours for mothers.

“After the maternal leave, some of them want to spend more time at home to be with their babies,” she said. “For those women, we allow them to remotely work at home in different time slots at their convenience. It can be two days a week or three days a week.”

But she acknowledged that there is still room for improvement since there is a skewed gender proportion department by department.

“When we look at Sanofi Korea, the medial and R&D organization is very much female-dominated, but men still make up 70 percent in the sales department,” Bae said. “So we need to work on gender diversity in positions and roles.”