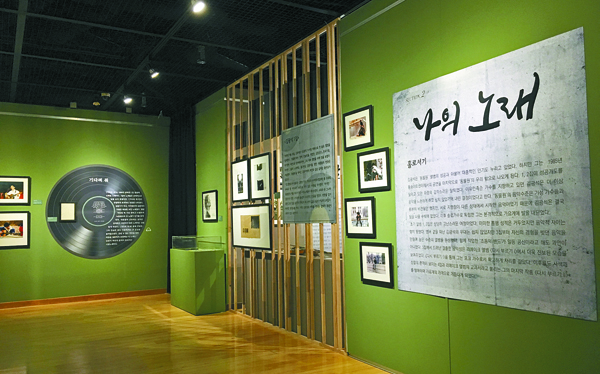 “Kim Kwang-seok: The Legend” commemorates the singer-songwriter on the 20th anniversary of his death. Visitors can learn about his music and life as they pass through eight sections. [KIM HYE-JUN]

“He was my friend, and that explains it,” Lee Taek-hee said when asked about why he directed the exhibition “Kim Kwang-seok: The Legend.”

The exhibition at a gallery in Seoul has been prepared to commemorate the 20th anniversary of the death of the singer-songwriter, who left an impressive mark on Korean pop culture in the 1980s and ’90s. Kim committed suicide in 1996 at the age of 31.

His voice and songs made people emotional, becoming lost in their own memories and thoughts. And his music did not fade away from people’s memories, as his songs - such as “Around Thirty,” “Becoming Dust” and numerous others - are often played and remade by artists nowadays.

The exhibition intends to let visitors experience Kim speak to them about his life and music himself using voice recordings of the late singer, recorded at his concerts and radio programs. Visitors can experience this using the audio guide as they navigate the exhibit.

Some 300 items related to Kim, which were provided by his bereaved family and fans, are on display as well. These include concert tickets, LPs, diaries, handwritten scores and memos.

Visitors can experience a total of eight sections that document Kim’s musical career and life in chronological order. The first section talks about how he started out in music, including his activities in a then-famous band, Dongmulwon, which means zoo in English.

The second, fourth and sixth sections focus on his musical career, such as his hit songs, albums and background information on several songs. Walking through the exhibition, people can discover his love for music as well as the musical concerns he had.

The third section helps people understand Kim as a person with displays of notes, diaries and memos he wrote when he was alive. Kim is known to have loved writing, and this section portrays his love for his family and music, as well as stifling concerns he had in his mind at times.

Tribute art pieces are collected in the seventh section. The artists and his fans specially prepared them for the exhibition in remembrance of Kim, including calligraphy, paintings and drawings.

“He left his music and dreams to us as presents,” the director said. “Just as he made songs ardently, I hope people can gain energy by sympathizing with him.”

The exhibition is being held in Daehangno in central Seoul, where Kim is known to have performed live more than 1,000 times. It is running until June 26 at the Hongik Daehangno Arts Center.